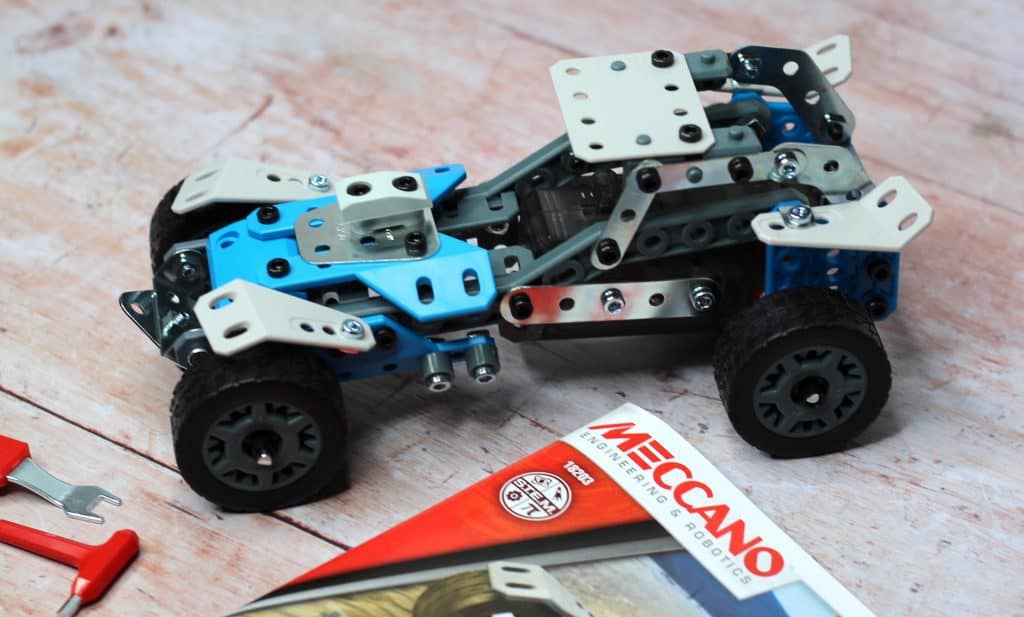 My Dad would always buy me Meccano as a child. I was a bit of a Tom Boy and absolutely didn’t fit any stereotypes but I think it was the one toy he bought more for himself! He was a mechanic and engineer and for him building things – particularly from scratch was extremely exciting. Henry is getting older and extremely interested in how things are built and the way they work so when we were offered a Meccano Rally Racer Set to review I thought this would be a perfect next step for him. 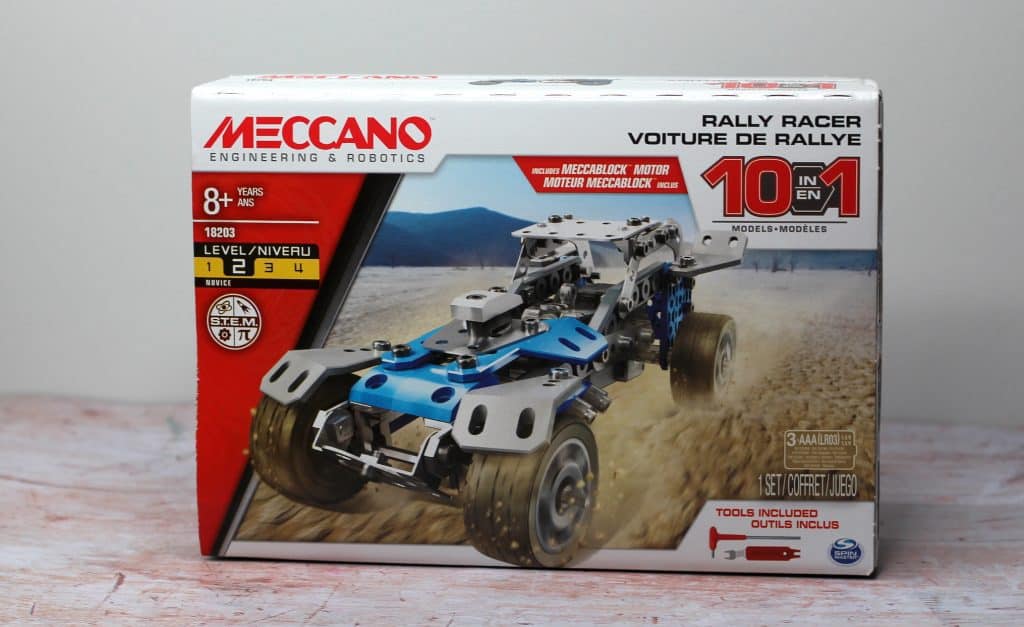 The Meccano Rally Racer set is suitable for ages 8+ and although Henry isn’t quite this age both he and his Dad built the set together and had fun in the process. The set has an RRP of £19.99 and includes all the pieces, step by step manual, tools and motor needed to build 10 different vehicles. The only thing you need to add are 3 AAA batteries.

Meccano sets are graded on different levels which identify how difficult they are. The Meccano Rally Racer is level two which was perfect for us since we are new to Meccano! 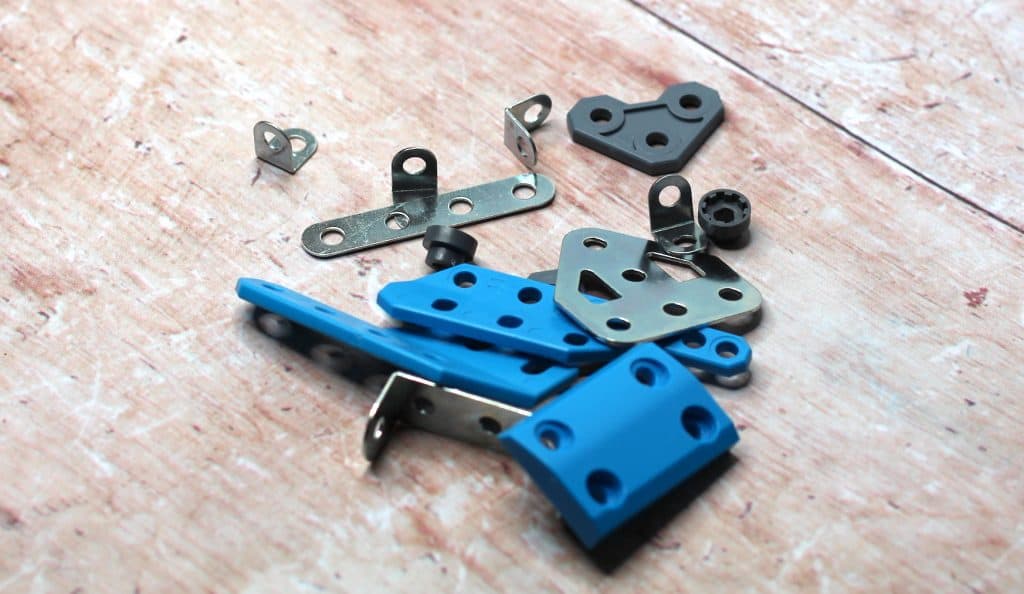 What did we think?

The step by step instructions are clear and easy to follow which was a sanity saver. That being said it was still a bit fiddly and there was some frustration from both Henry’s Dad and I which just makes me giggle! The set is recommended for 8+ but I think even then they may need some additional adult help – we certainly could have used it! In fairness though this was likely because it was our first time building a Meccano set and I imagine that over time we would master the technique! 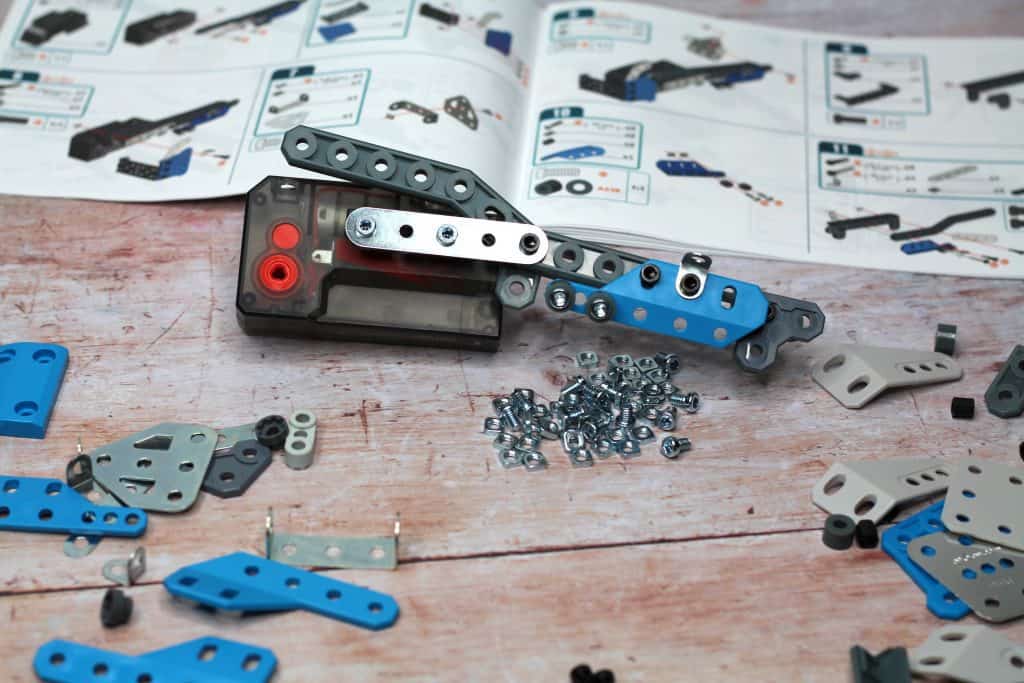 We managed to build a vehicle and make it run with the motor which Henry found fascinating. We only had a couple of spare pieces left over which gives me a bit of anxiety because the screws are quite small I imagine if we lose one we won’t be able to find it! It would be a great addition to have some spares. The pieces themselves are well made and the vehicle is sturdy. I think the set is a fair price and I liked that everything was included (except the batteries) making it a self-sufficient set perfect for rainy days. I hate sets that require specialist tools that aren’t included it just makes it difficult finding the right size equipment! 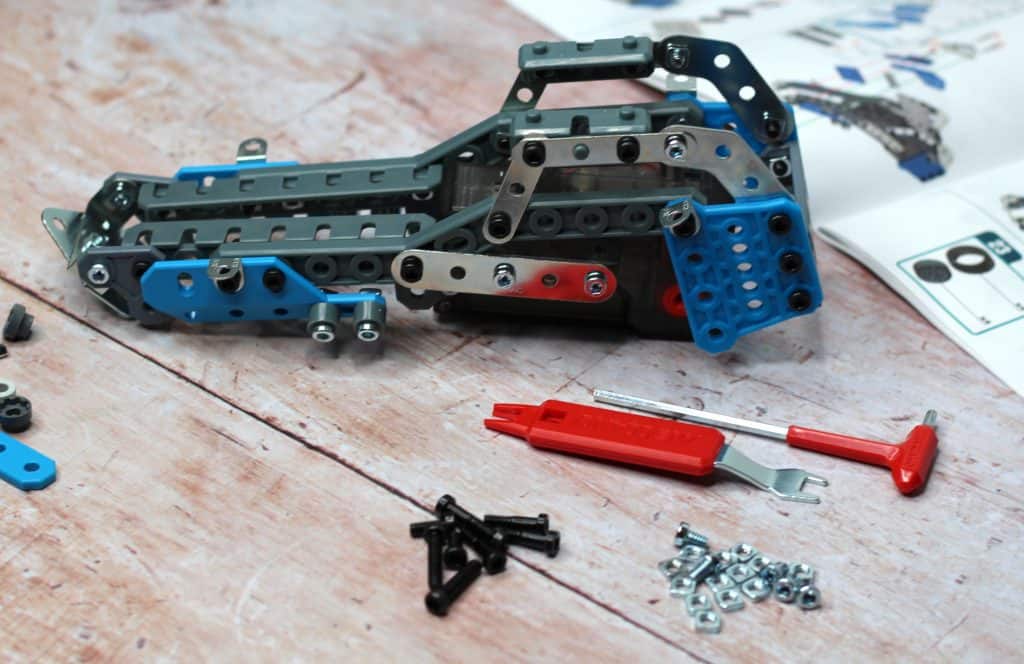 More than just a Toy

Although for us adults the building process was a bit frustrating it was nice that it took a fair amount of time to build the vehicle (1-3 hour construction time). It would be easy to take a break and come back to it later but it was a great way to get Henry away from the computer which is something we have been limiting lately. This is also a S.T.E.M building set which means incorporates Science, Technology, Engineering and Math making this not only a fun toy but an educational one too!

Henry loved finding out how it was going to work and seeing the transformation from a bunch of pieces into a vehicle that moves both forwards and backwards. Oh and the best part is that in this one set you can build up to 10 different vehicles so the fun doesn’t stop after the first build!

You can purchase the Meccano Rally Racer and other Meccano sets from Amazon.

*We were sent the Meccano Rally Racer in return for an honest review. As always all words, opinions and views are my own.  For more information on any of this please head over to this page.