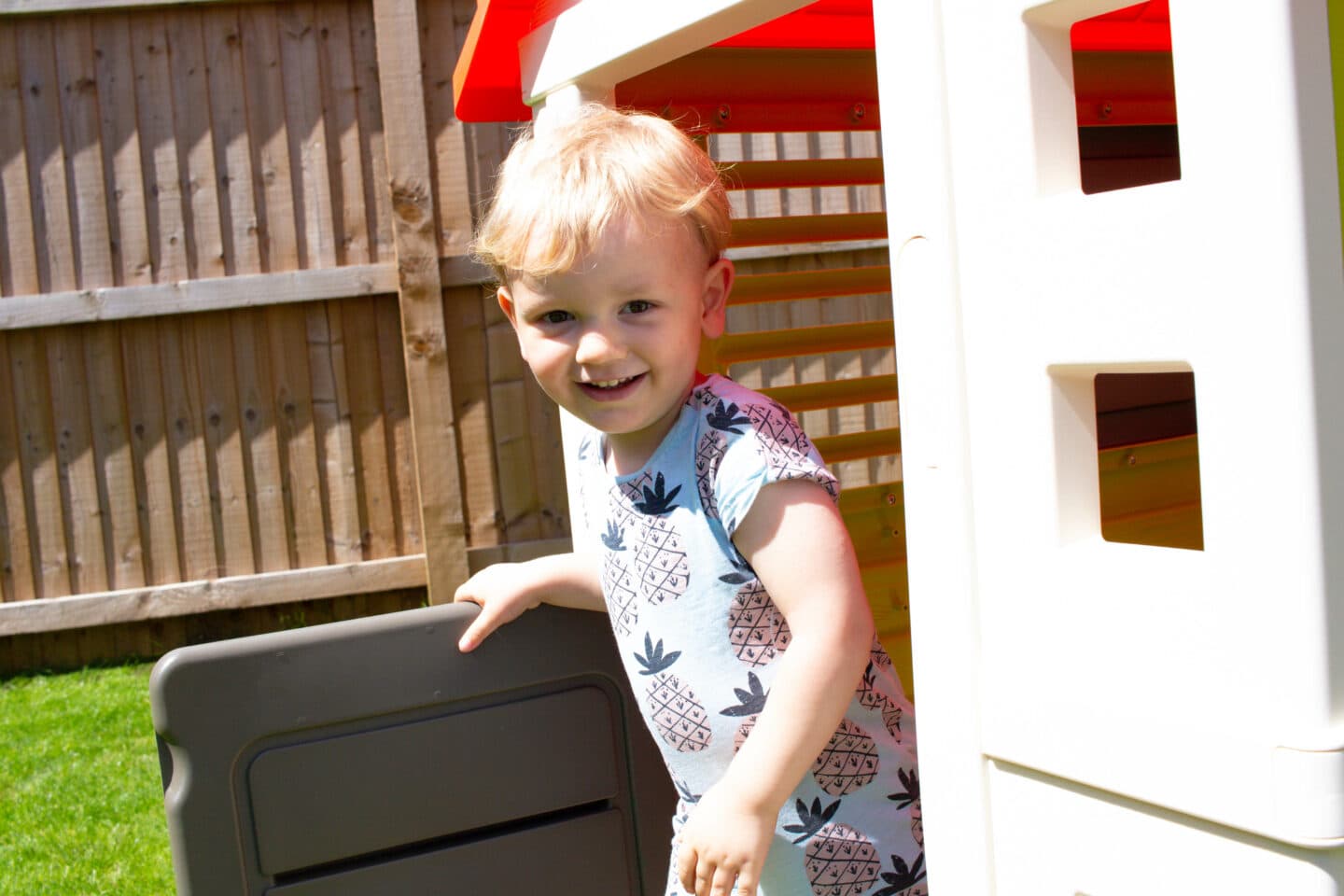 Imaginative play is a key part of any child’s development and something I have encouraged with both of my children from a young age. Allowing a child to play with the expansion of their mind alone is an incredible way to help them develop their language, social and problem-solving skills. I learnt a hard lesson with my first son that children don’t need an abundance of ‘things.’ I made that grave mistake as a first-time mum of showering toys from all angles only to find that my son became overwhelmed and almost lazy in his play. With Hugo, we have really minimalised his toy selection and don’t get me wrong the kid wants for nothing, but by choosing items like the Smoby Playhouse or Smoby Tefal Studio XL Bubble Kitchen, it’s giving him the option to use his own imagination. 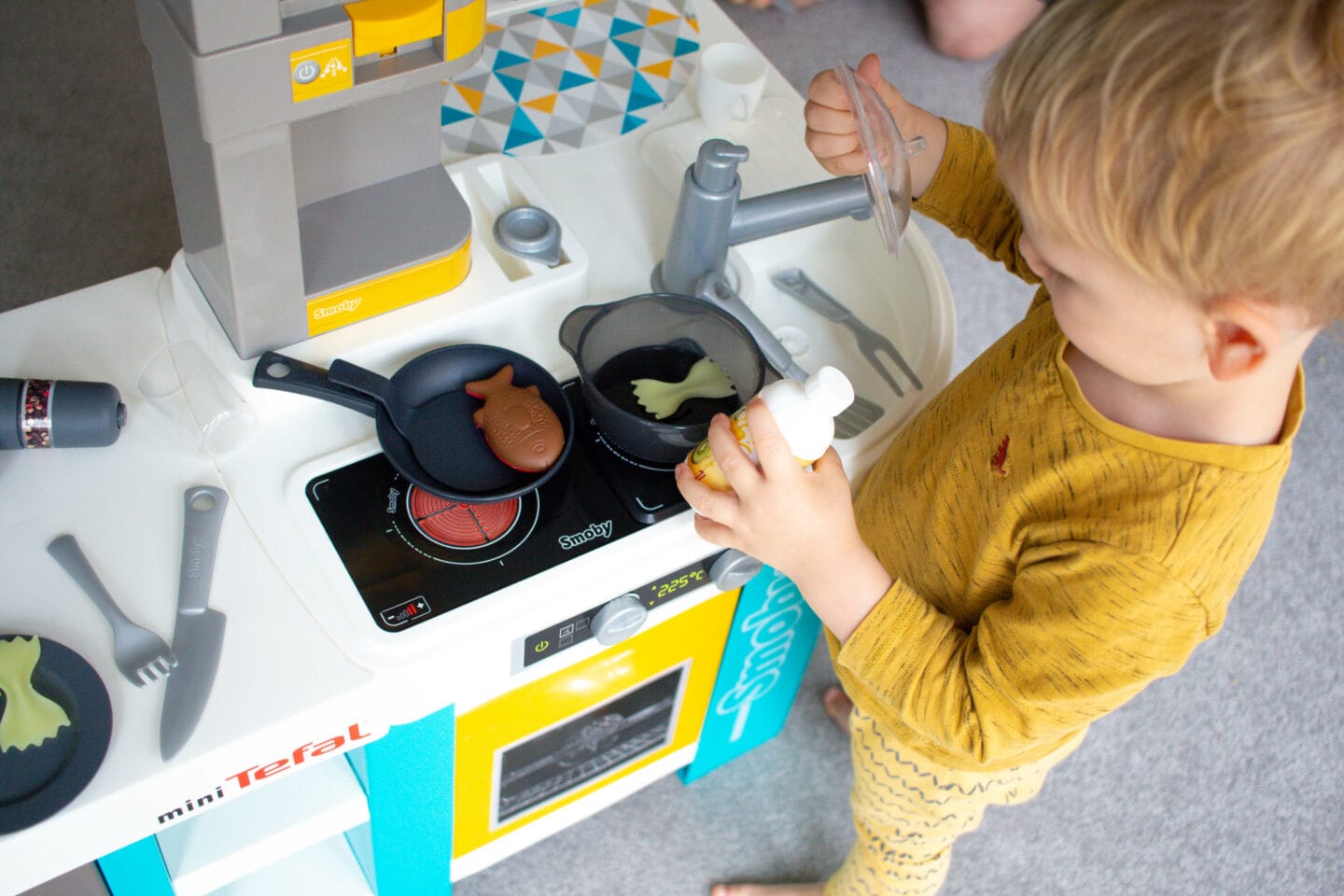 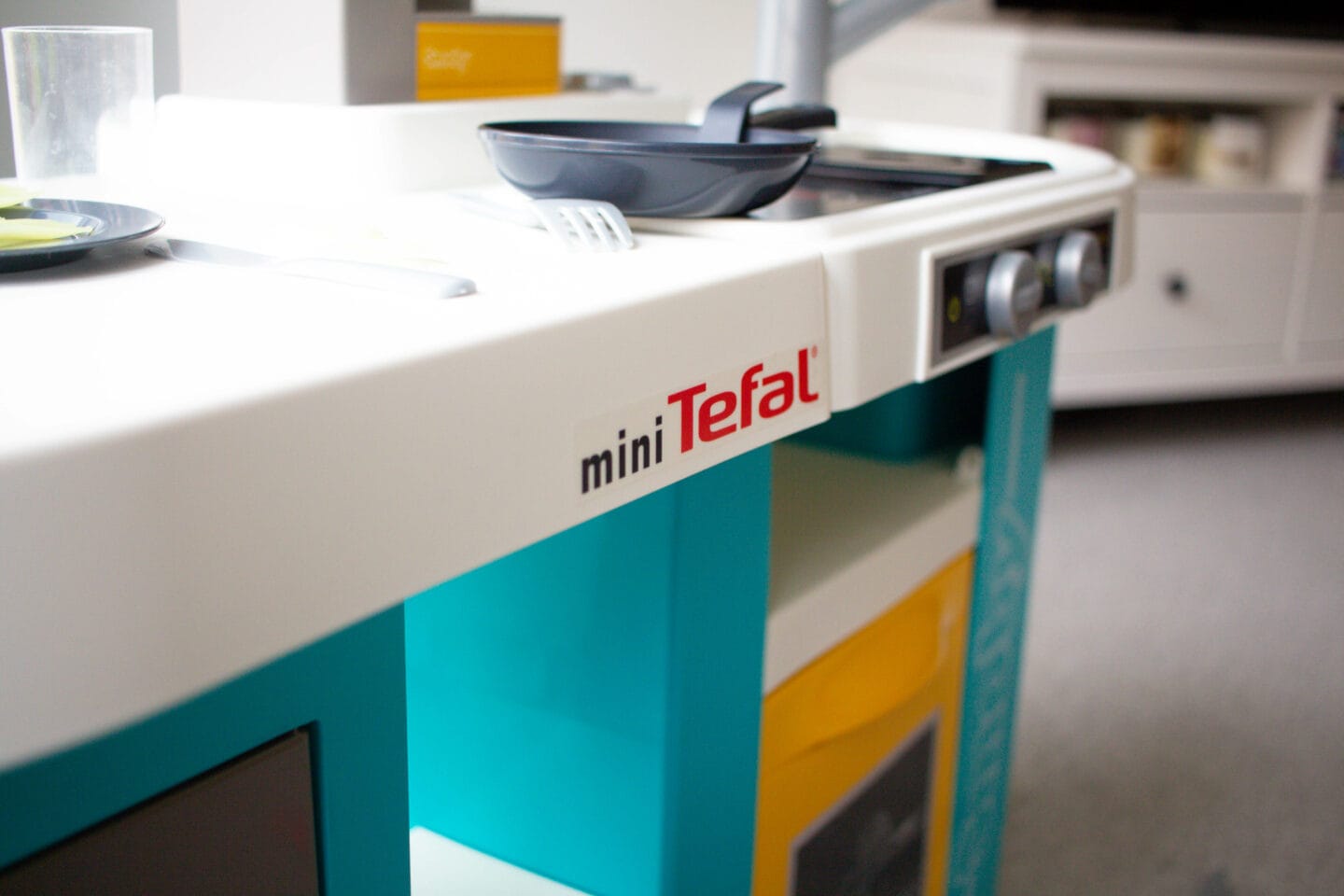 Children mimic what they see and often want to recreate this in their own play. I first noticed Hugo would pretend blocks were food and he would bring me a book as a makeshift plate and we would pretend he was cooking in a kitchen. This fascinated me, and it’s something I wanted to build on. 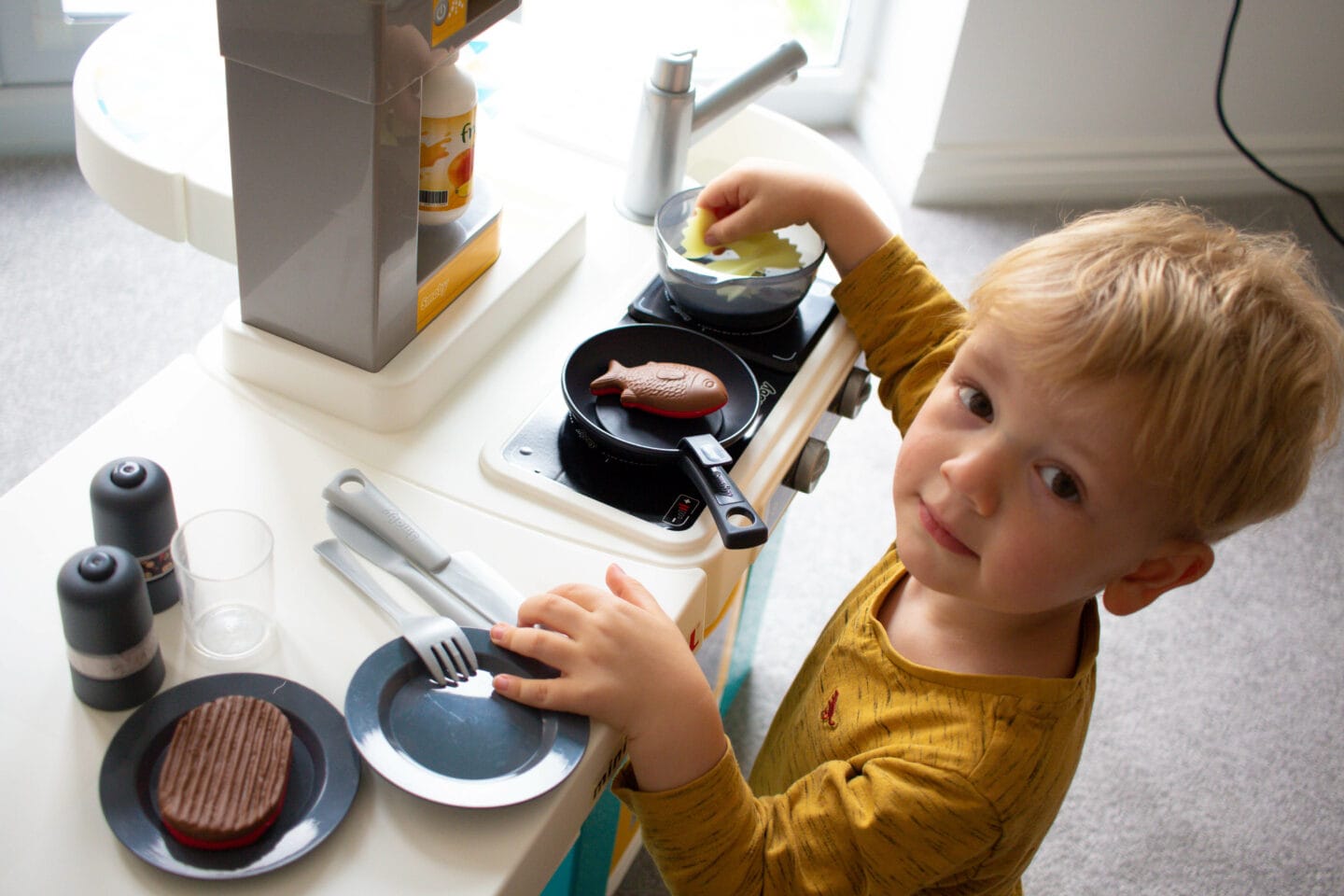 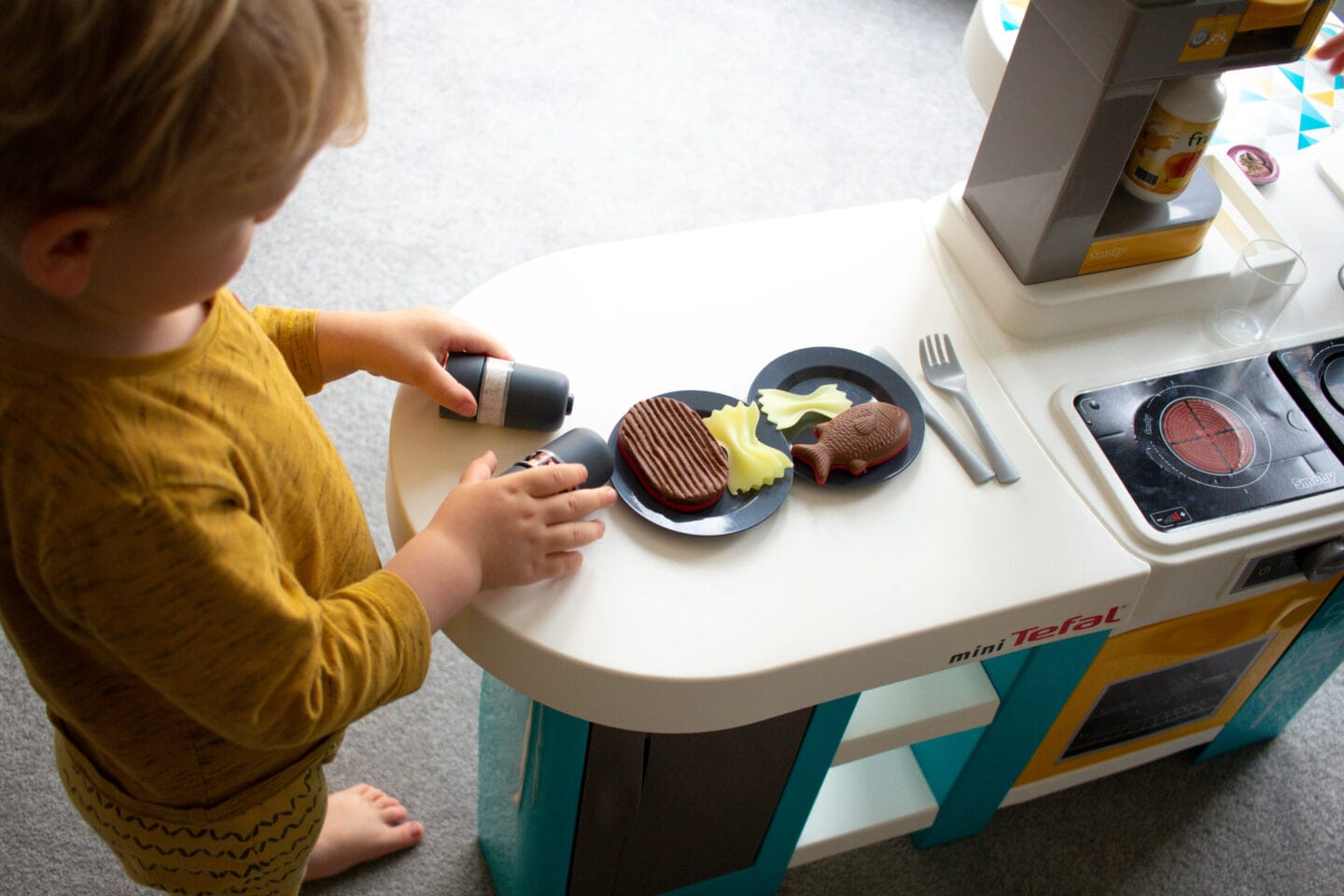 The Smoby Tefal Studio XL Bubble Kitchen has been a great addition to Hugo’s imaginative play, and he has been able to build on his games using a smaller kitchen set up just like his mum!! He pretends to wash up, puts things in the oven and makes me endless cups of coffee (I only wish they were real!!) The Smoby Tefal Studio XL Bubble Kitchen has lots of additional features that will see his imagination expand as he gets older. Like the frying pan that actually flips the pancake or the pot that makes water bubble and the pasta that changes colour as it “cooks.” These fundamental elements are what will encourage Hugo to expand his imagination further all while having fun! 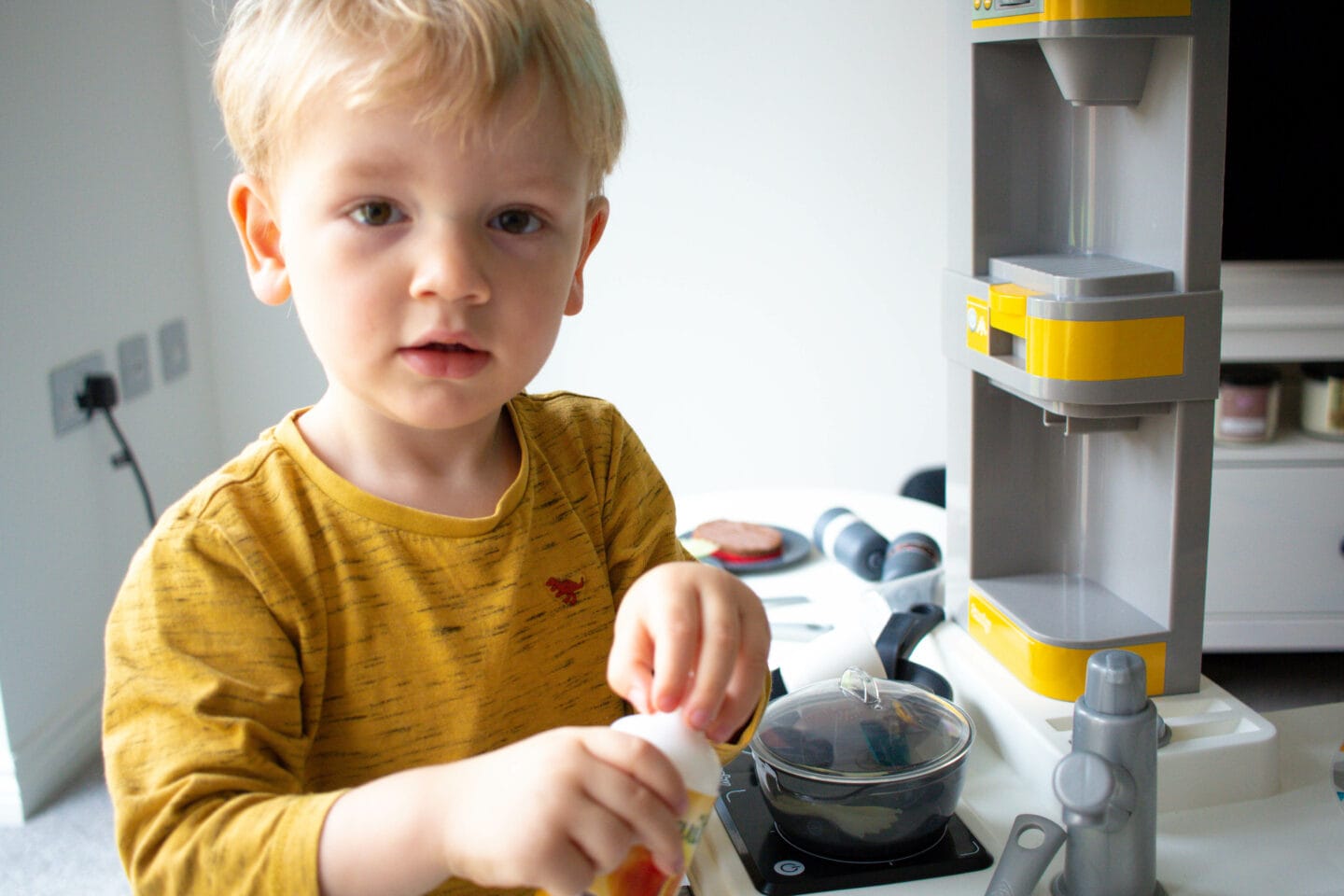 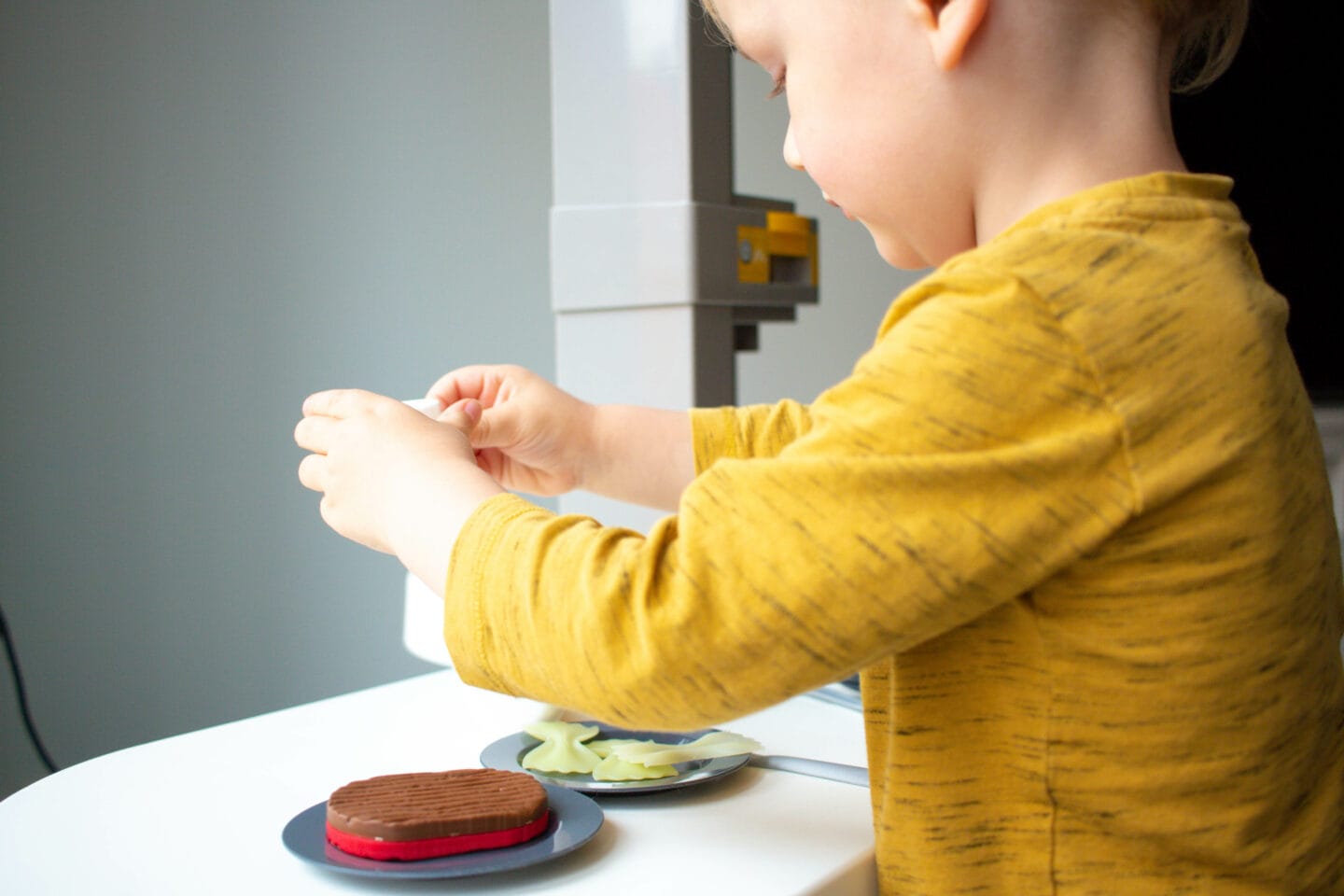 So, we have established that Hugo is obsessed with the play kitchen but from a parent point of view, does it really make the cut? I like the shape and size of the kitchen – it’s not too small, but it doesn’t take up my whole lounge either. The “L” shape means that I can tuck it away in a corner when Hugo has gone to bed, making it ideal for those with limited space. 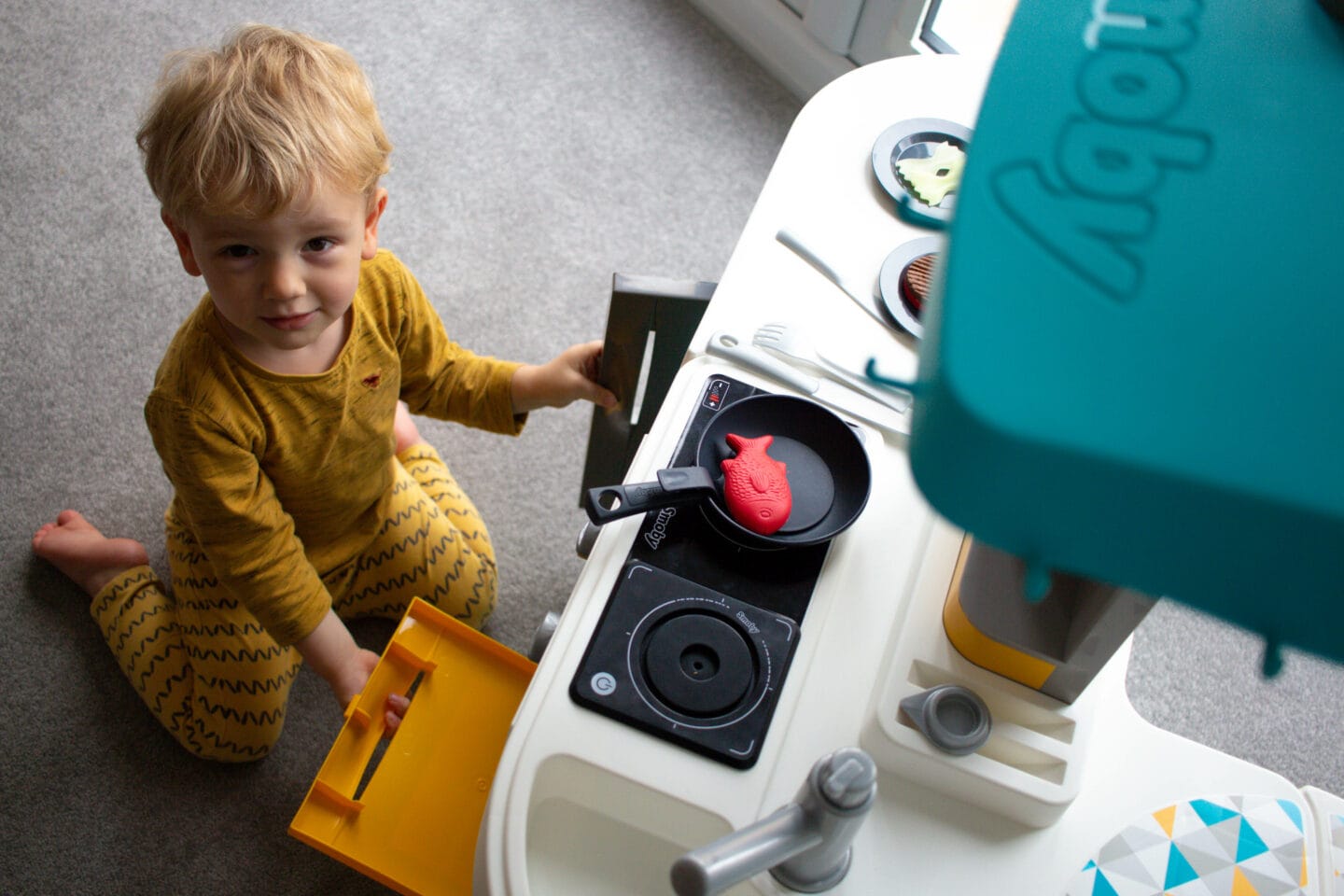 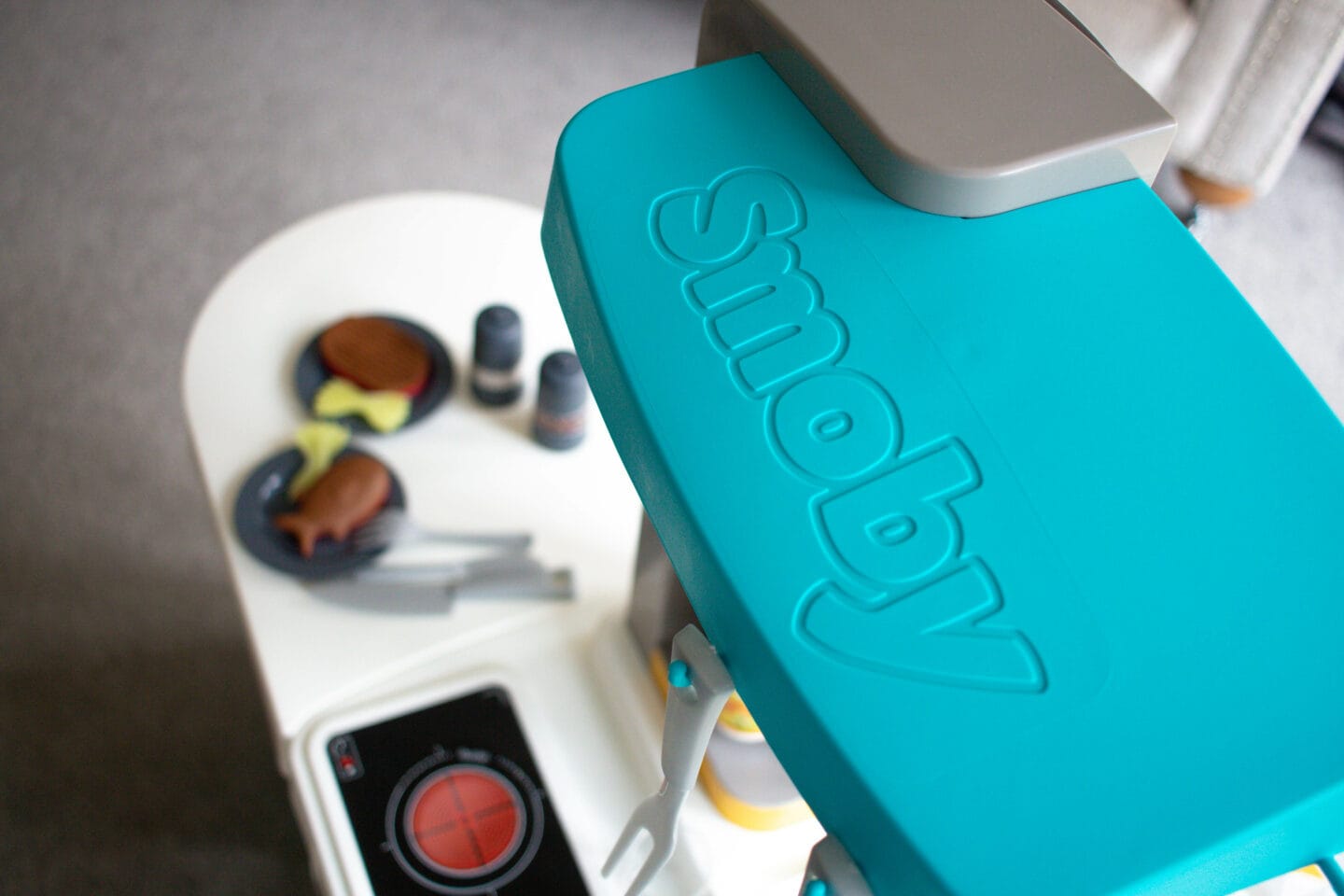 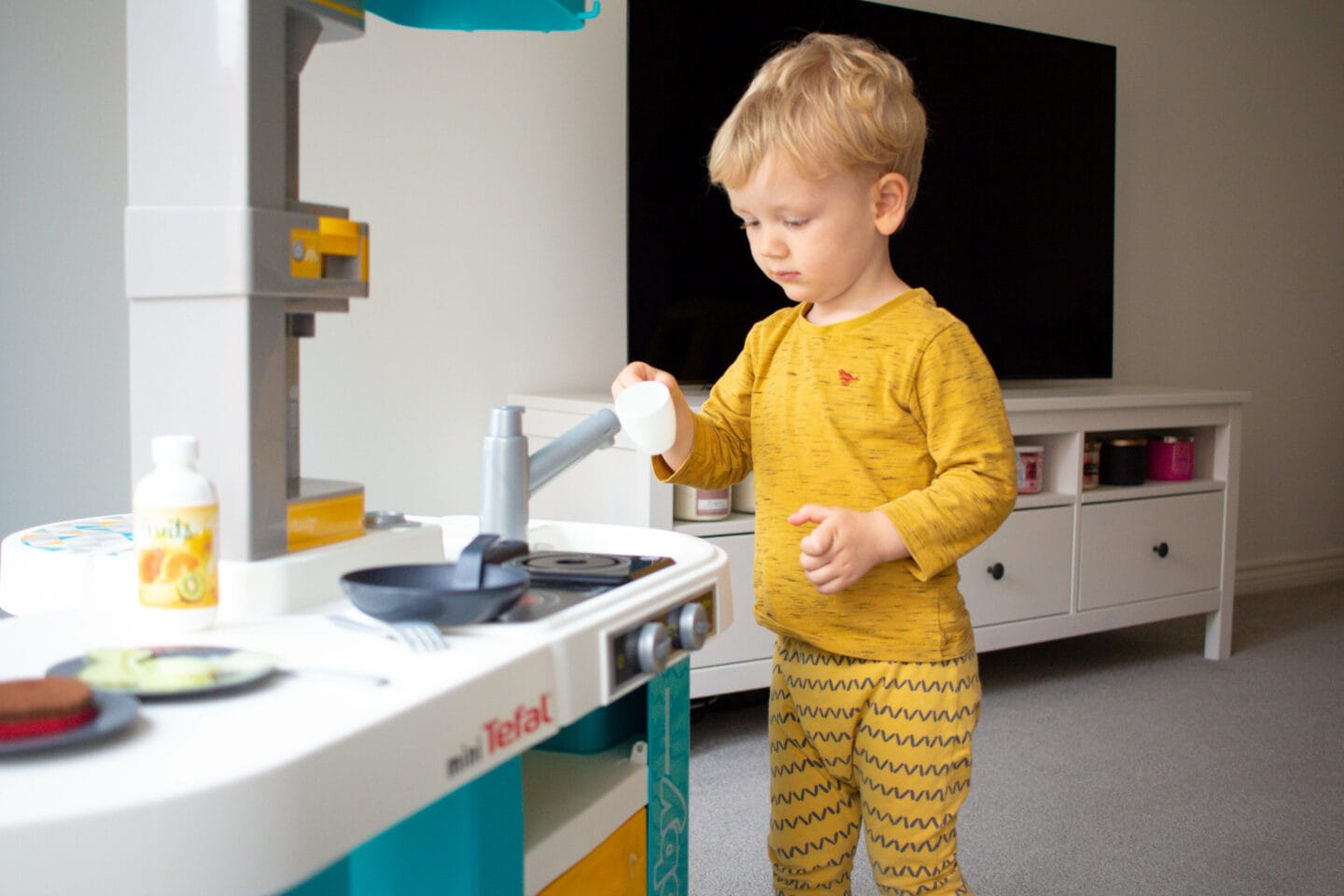 It’s well made and sturdy, which is ideal as youngsters are often heavy-handed and they can, without meaning to be quite rough. The kitchen comes with 34 accessories I mentioned some of them before, but they include some pretend glasses, cups, plates, knives, forks etc. You could easily expand on this and add in play food and accessories you may already have at home. That being said it isn’t a toy that needs anything additional adding to it and I think you get a good number of accessories as standard. 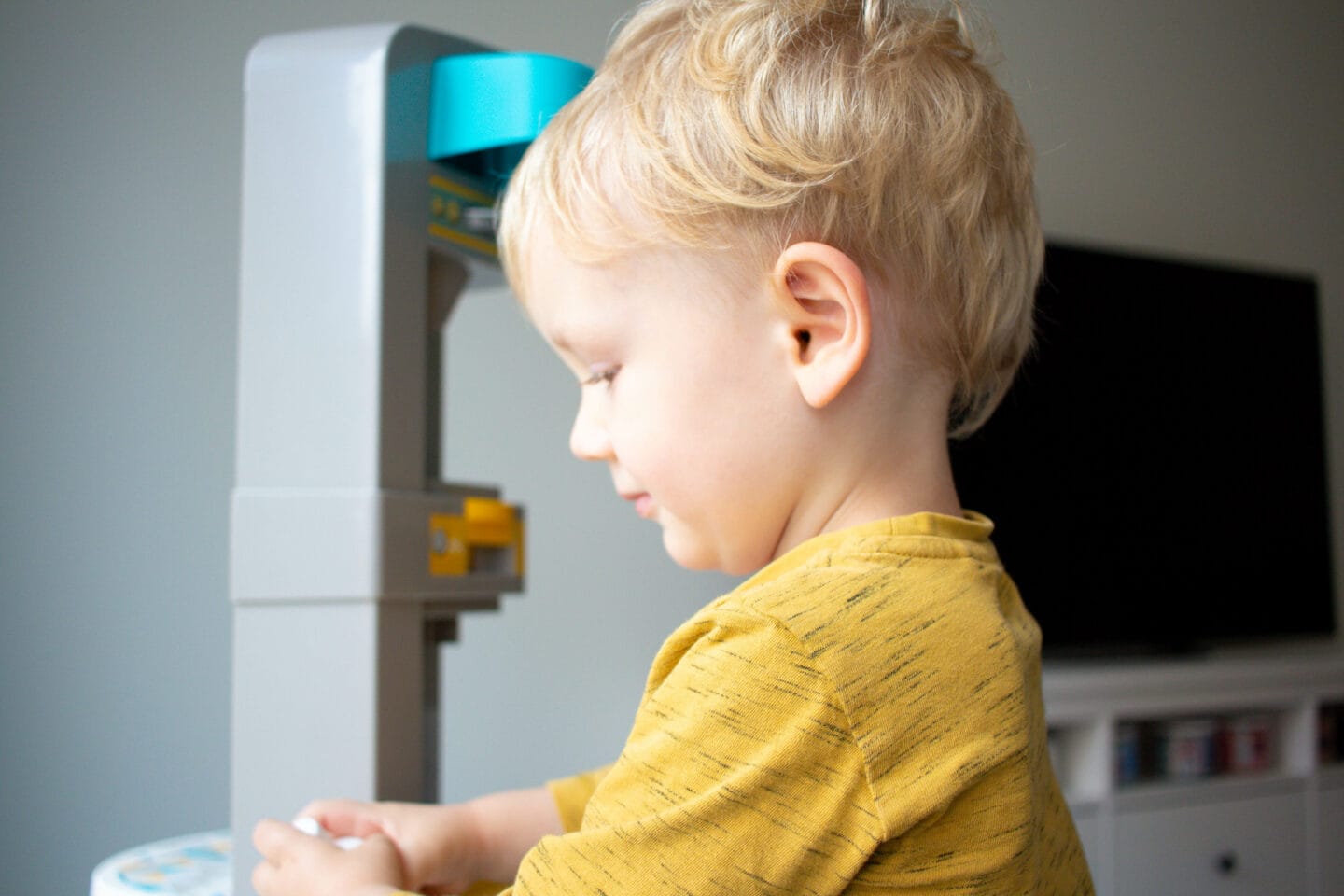 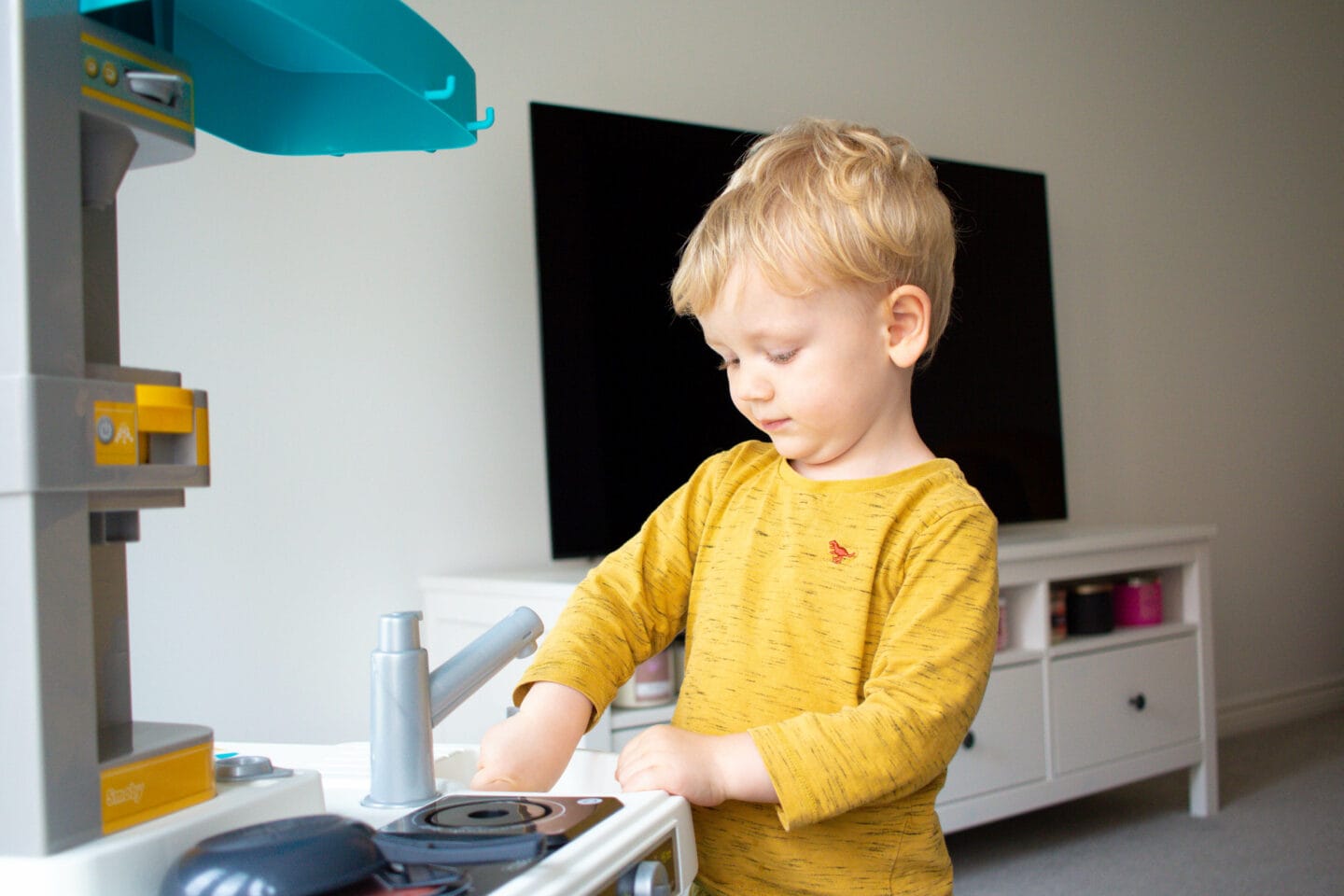 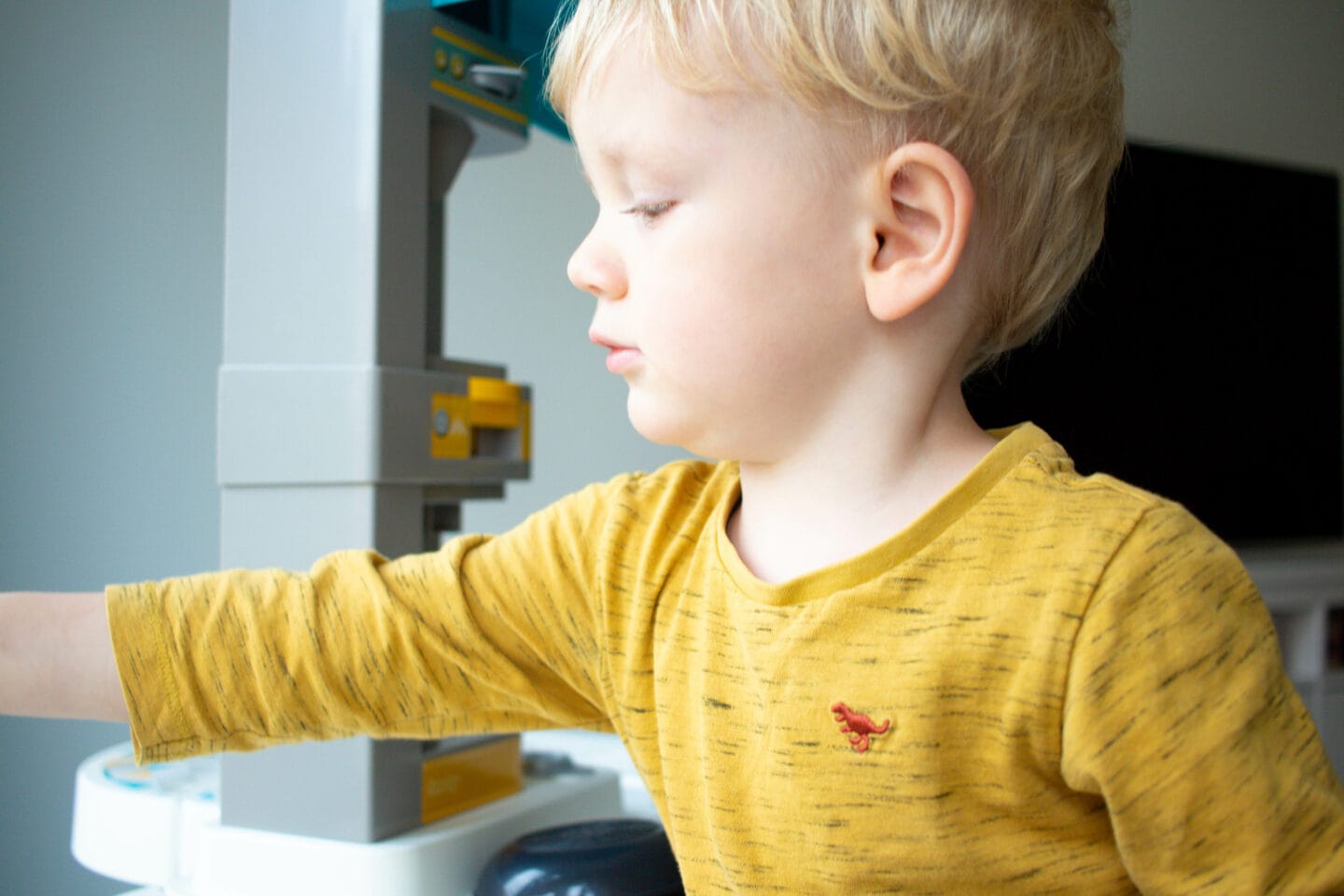 My least favourite thing about the toy is building it. A toy like this obviously comes in pieces to join together, and that is just not my forte! My husband swooped in and saved the day, but it did take around 45mins – 1hour in total!! The bonus is that you only have to build it once, it doesn’t require any specialist tools and the instructions are actually really simple to follow! 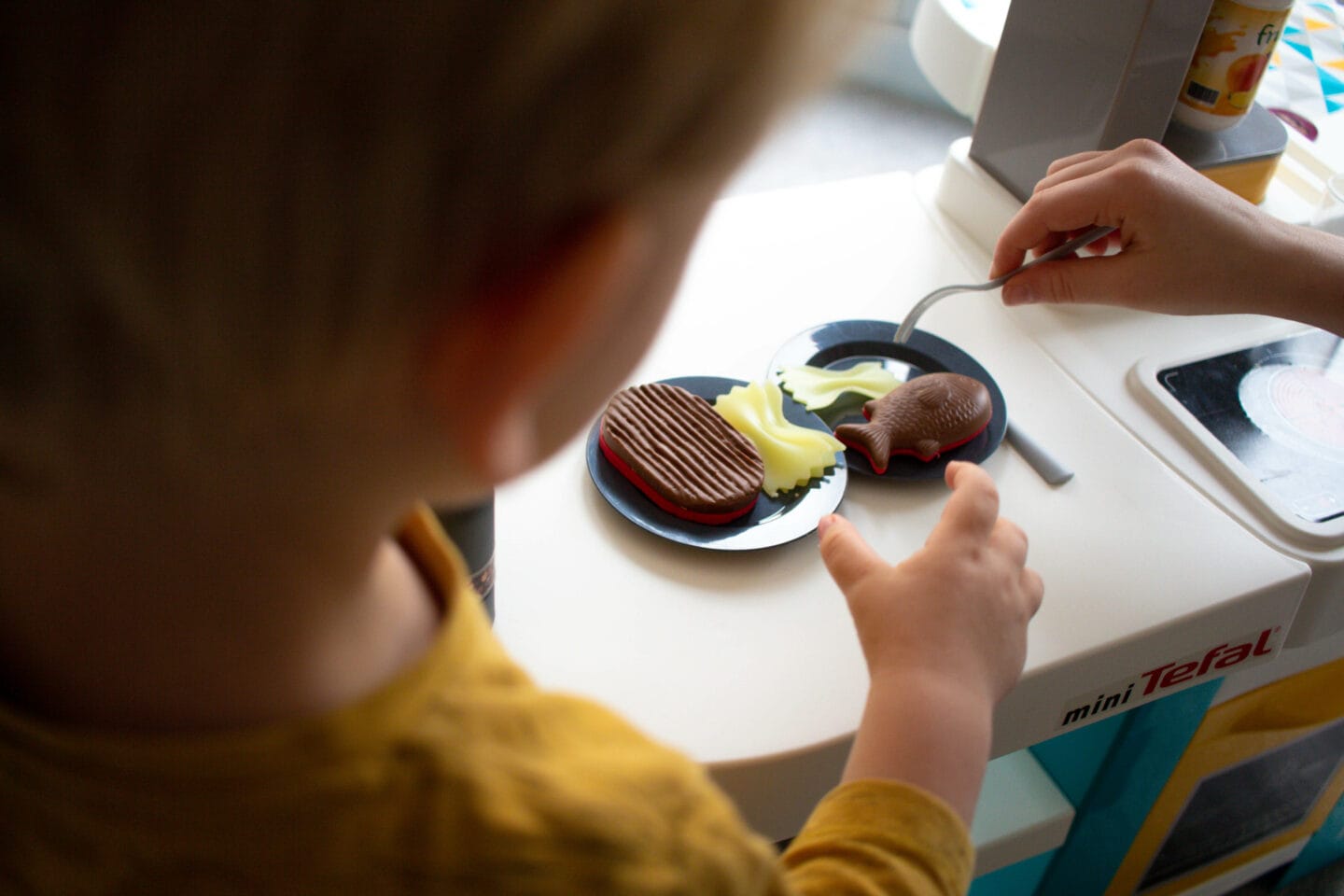 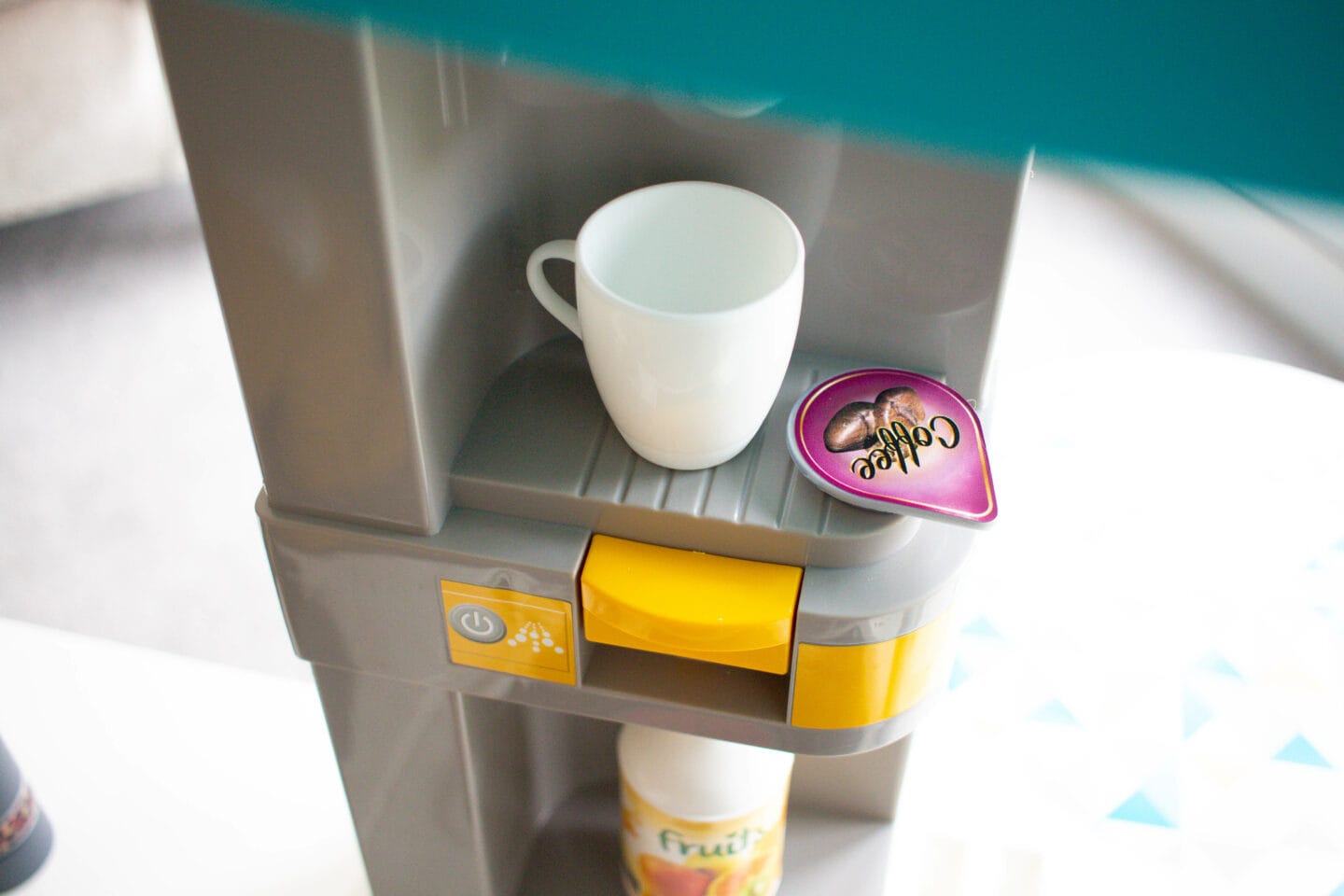 Honestly, the Smoby Tefal Studio XL Bubble Kitchen is a huge win for us from both a child and parent point of view. If you want something well designed and made, then this is definitely a clear winner. It’s easy to wipe down and light enough to move around or take outside on a nice day too! You can find out more and purchase from Amazon SRP £99.99. 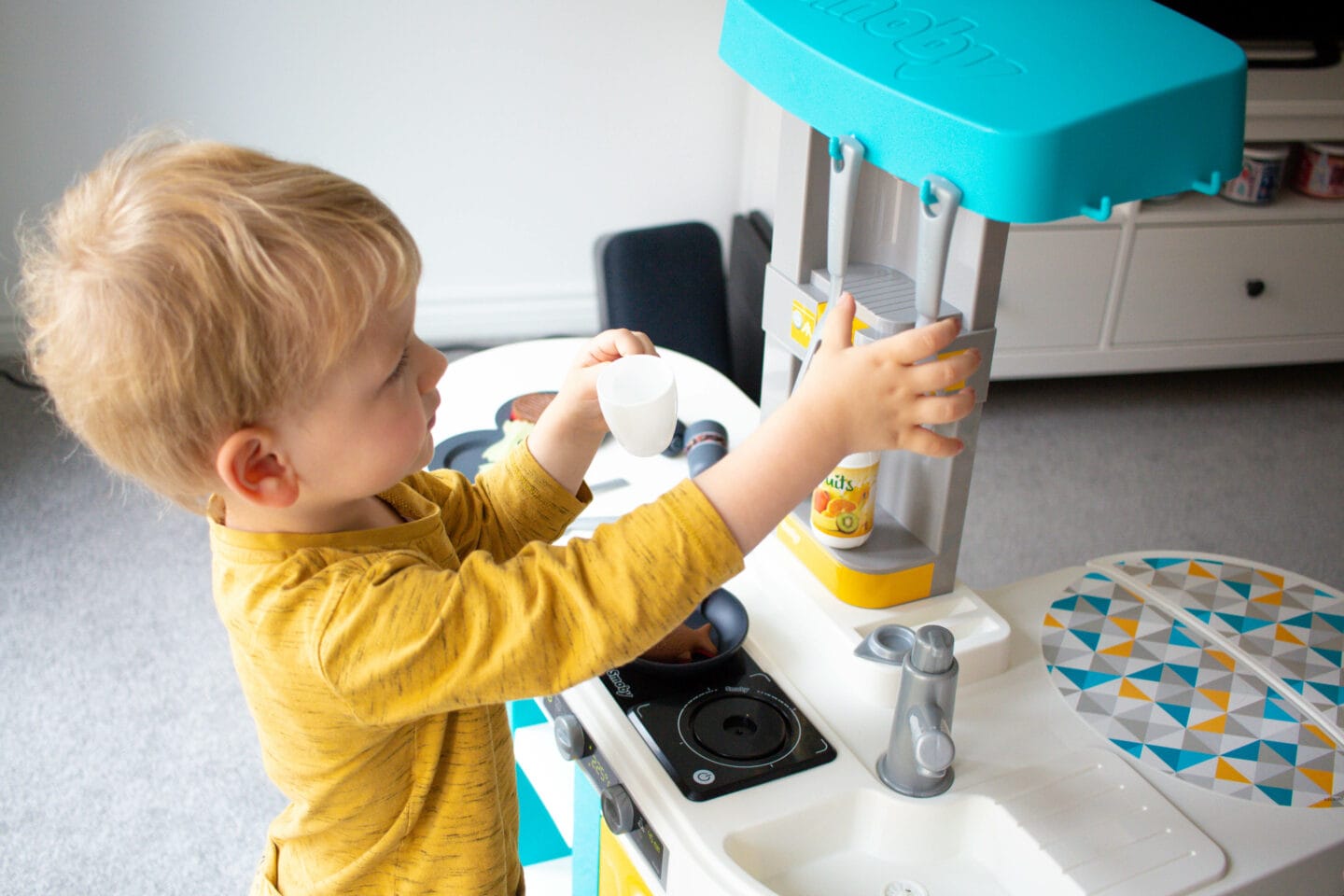 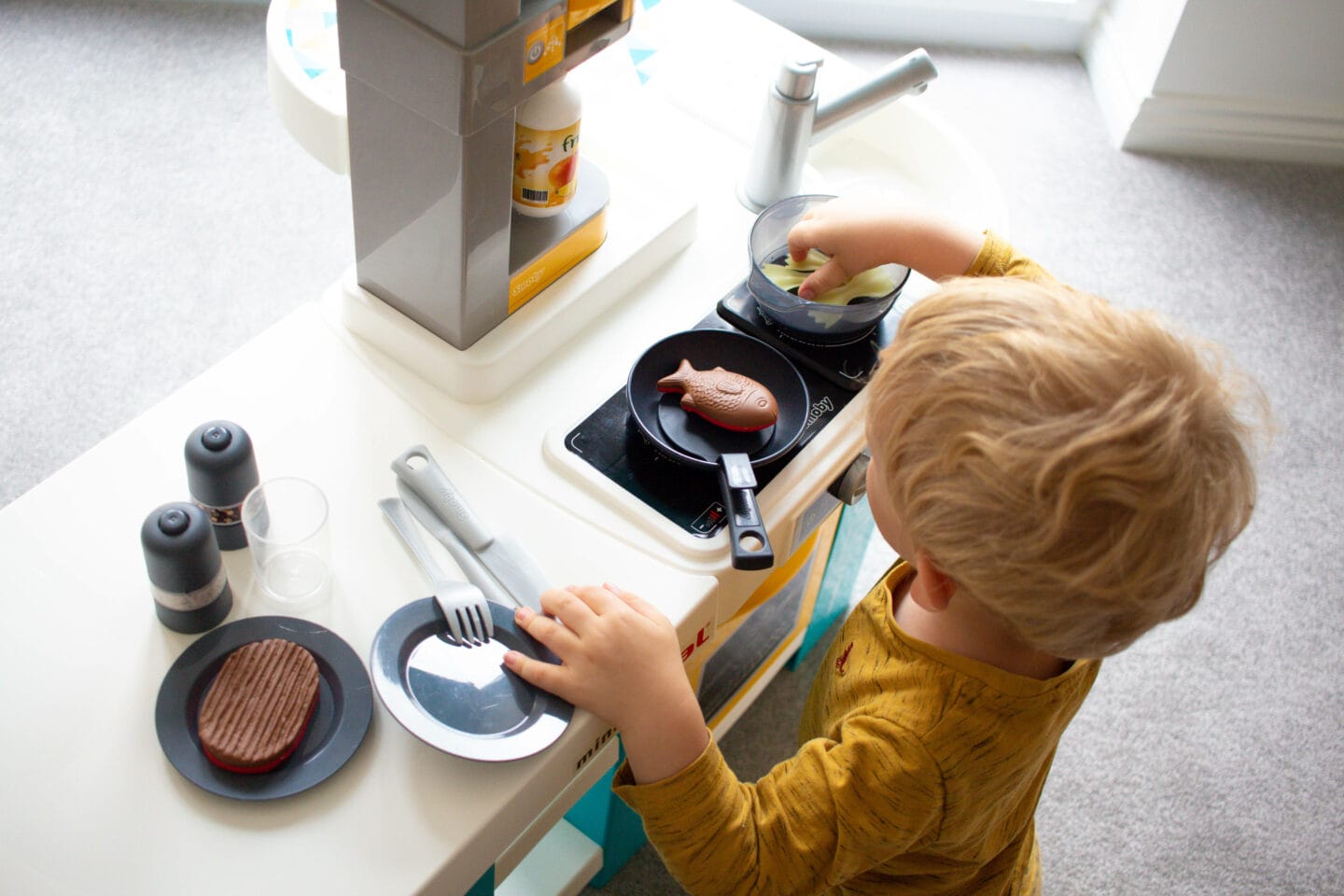 On top of the Smoby Tefal Studio XL Bubble Kitchen Hugo has also been lucky enough to test drive the Smoby Playhouse!!! One thing we really lack as a household is outdoor toys. Over the past four months, we have been shielding, which has seen us stuck in the garden, and if I am honest, my boys have become quite bored! The Smoby Playhouse has been a fantastic addition giving Hugo that imaginative play element outside. 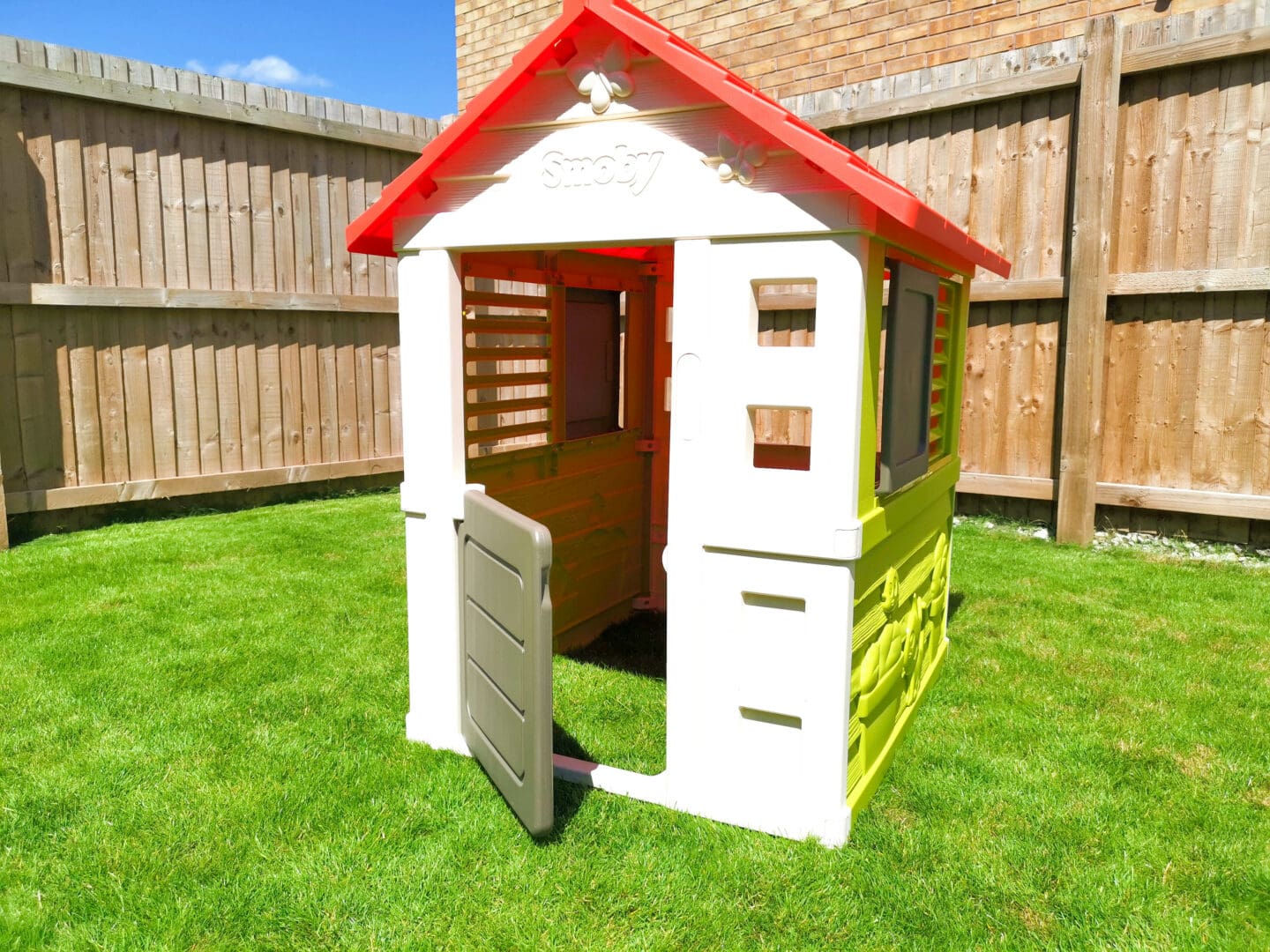 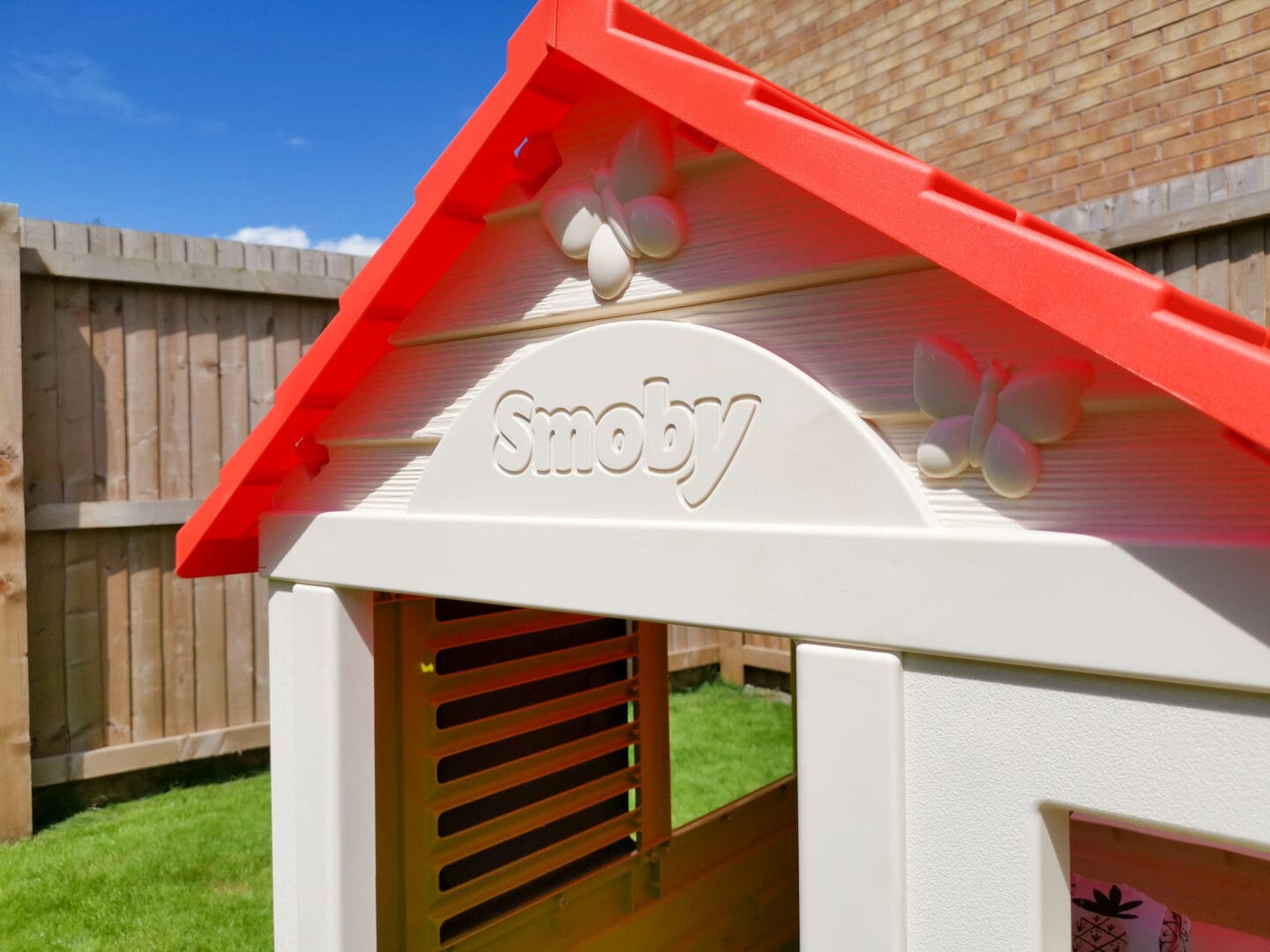 I cannot put into words how cute it was to see Hugo slide open the window and shout “‘ello!” He absolutely loves the Smoby Playhouse, and the only problem is trying to get him back inside at the end of the day! There are two windows which slide open and closed, and a half door which pushes open – both are easy for even small hands to work unaided and let me tell you they have seen their fair share of use since we put it up! 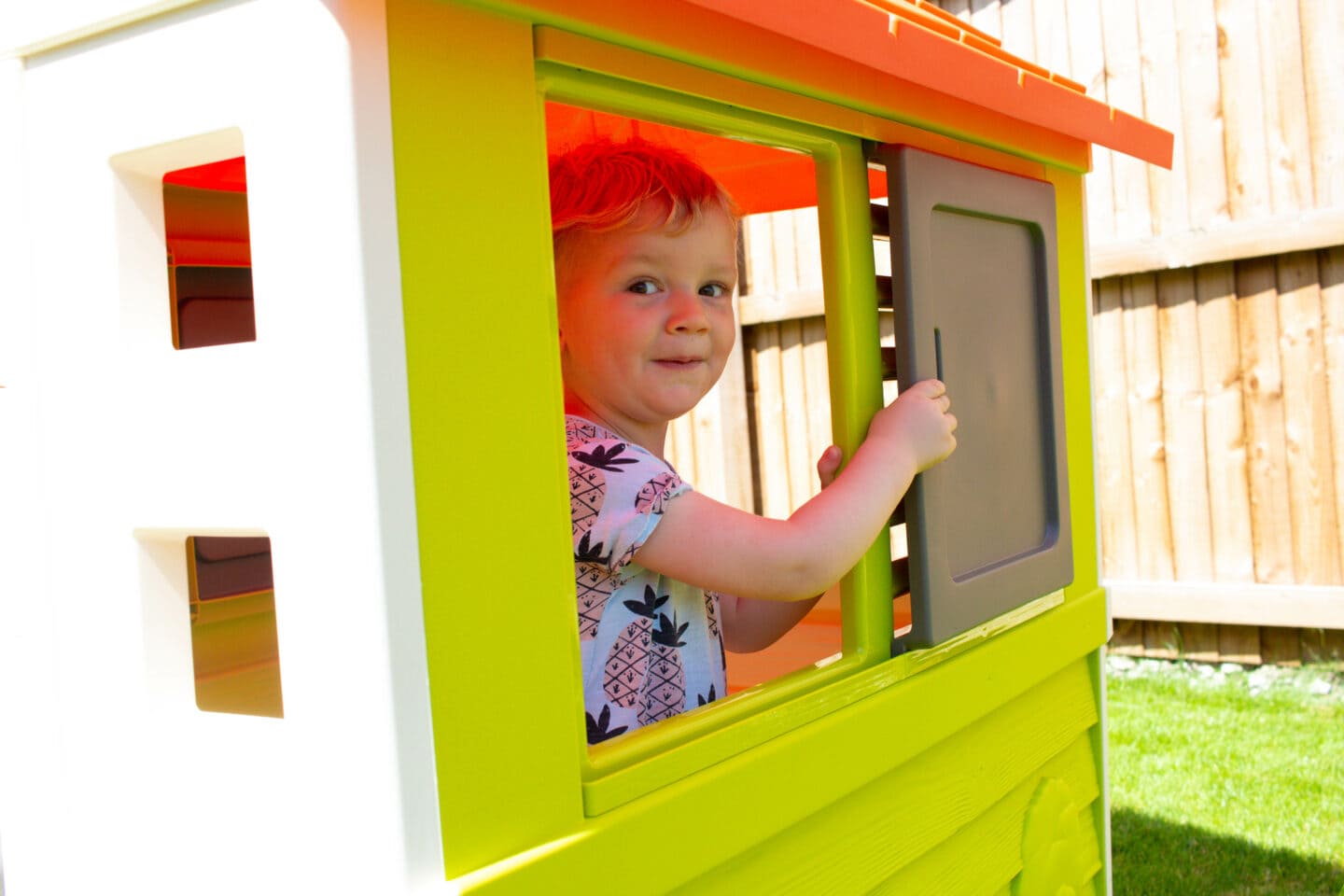 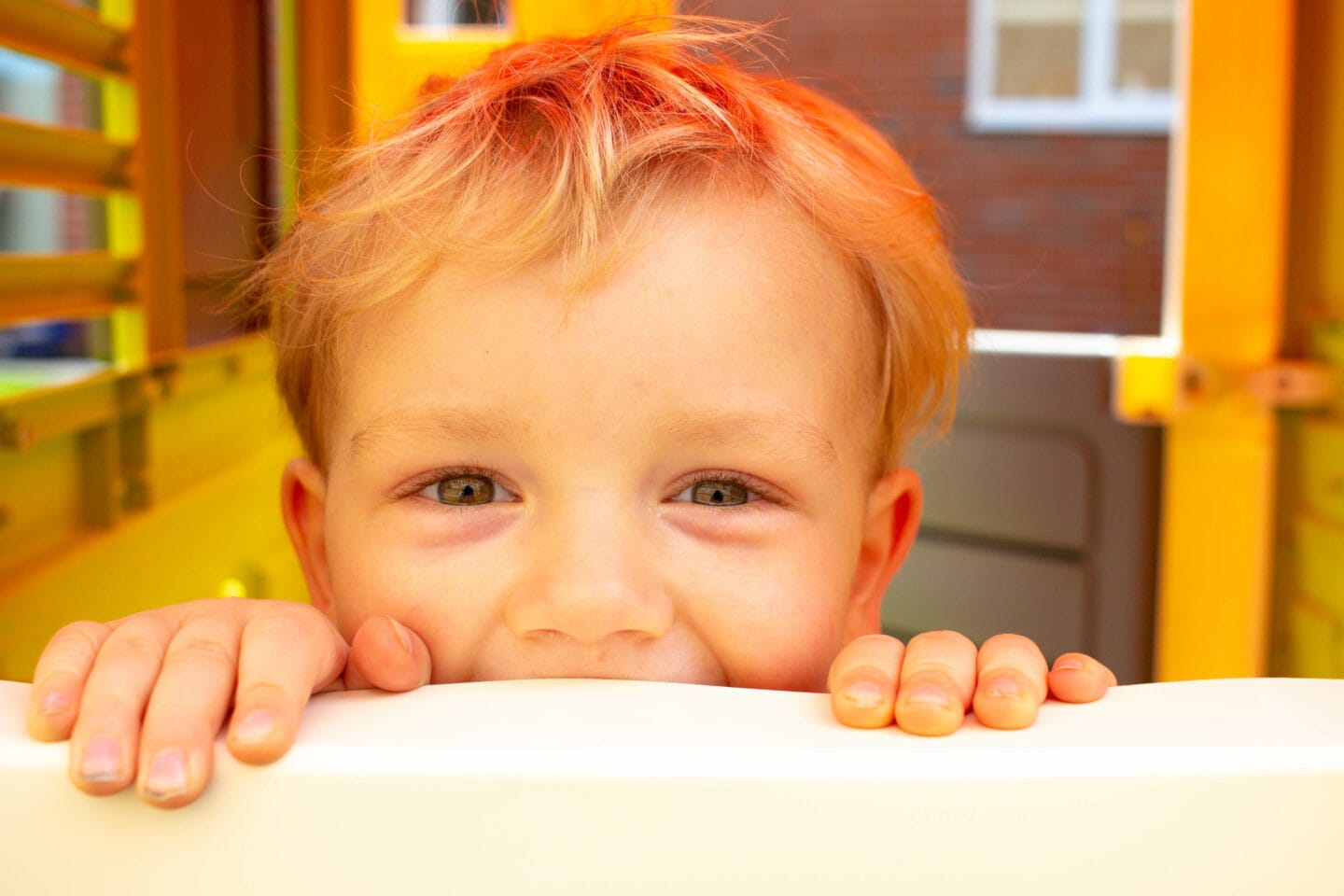 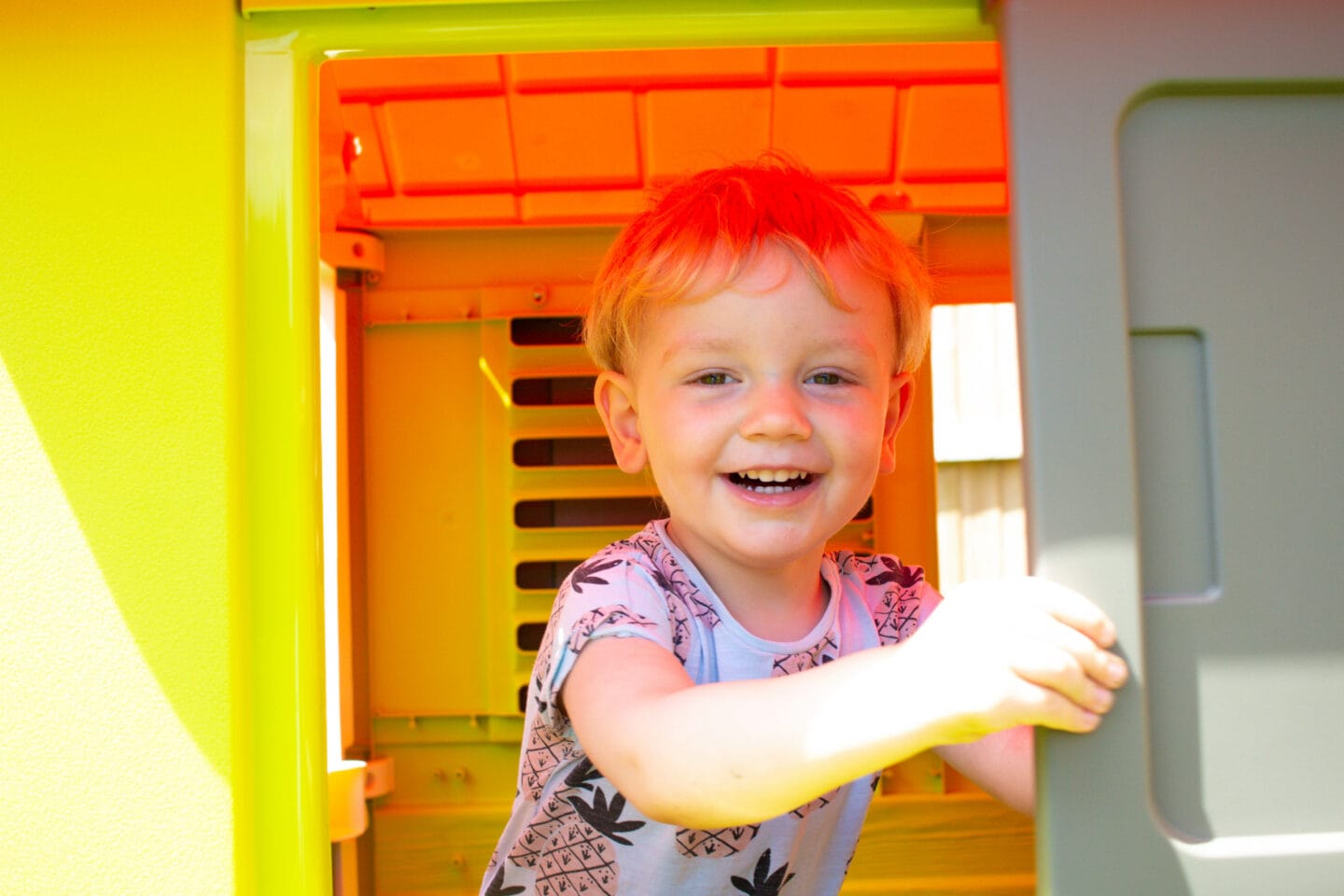 I love the Smoby Playhouse almost as much as Hugo as it gives me a good break to sit down and drink a warm coffee. I love watching him play his imaginary games going in and out of the playhouse, chatting away to himself. He often drags his older brother in on the action too! In terms of building the playhouse, I won’t lie, I was nervous it was going to be a big job, but I was pleasantly surprised. Like with the play kitchen, the instructions were straightforward and simple to follow, and the playhouse was constructed and ready to play with in under 30 minutes! 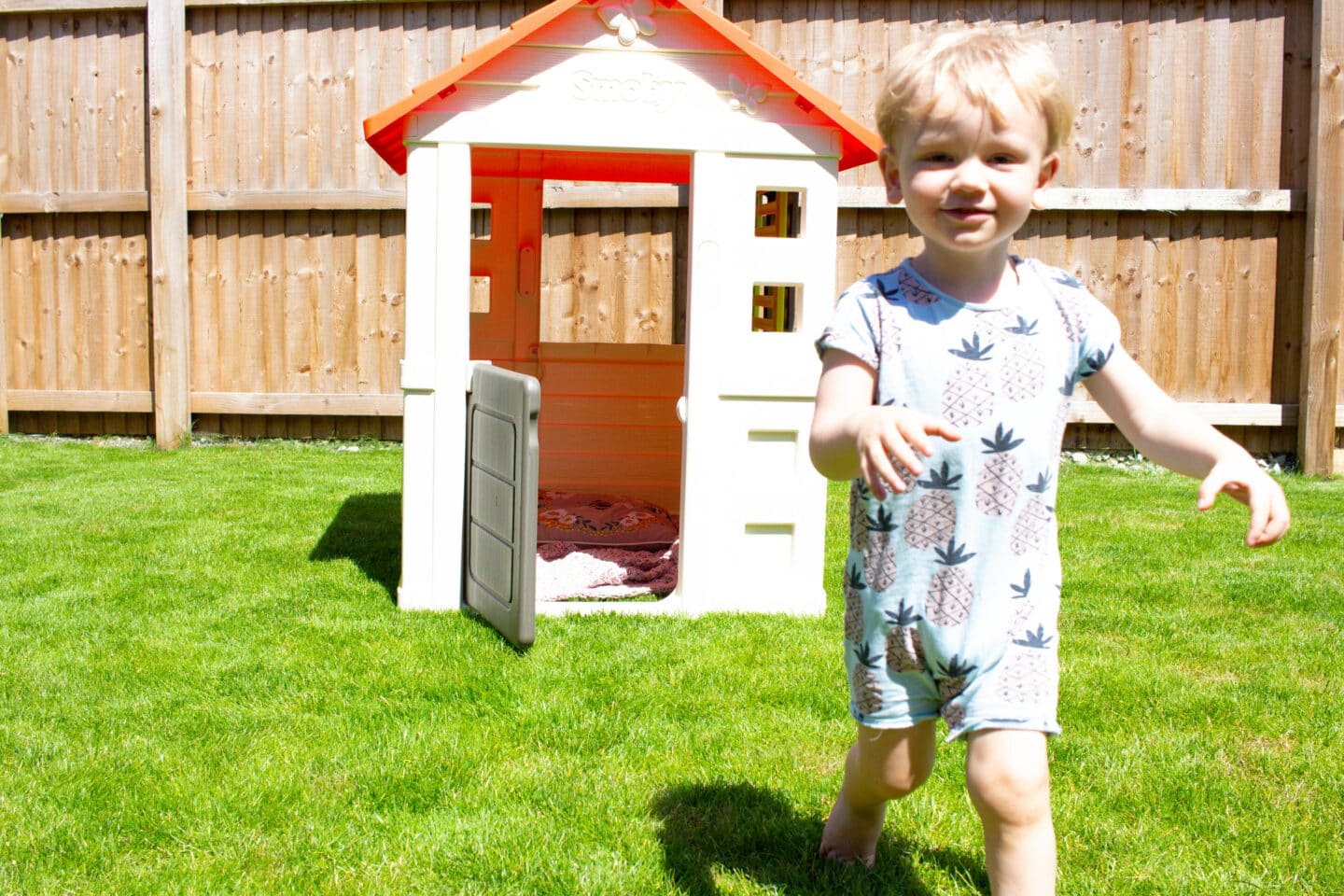 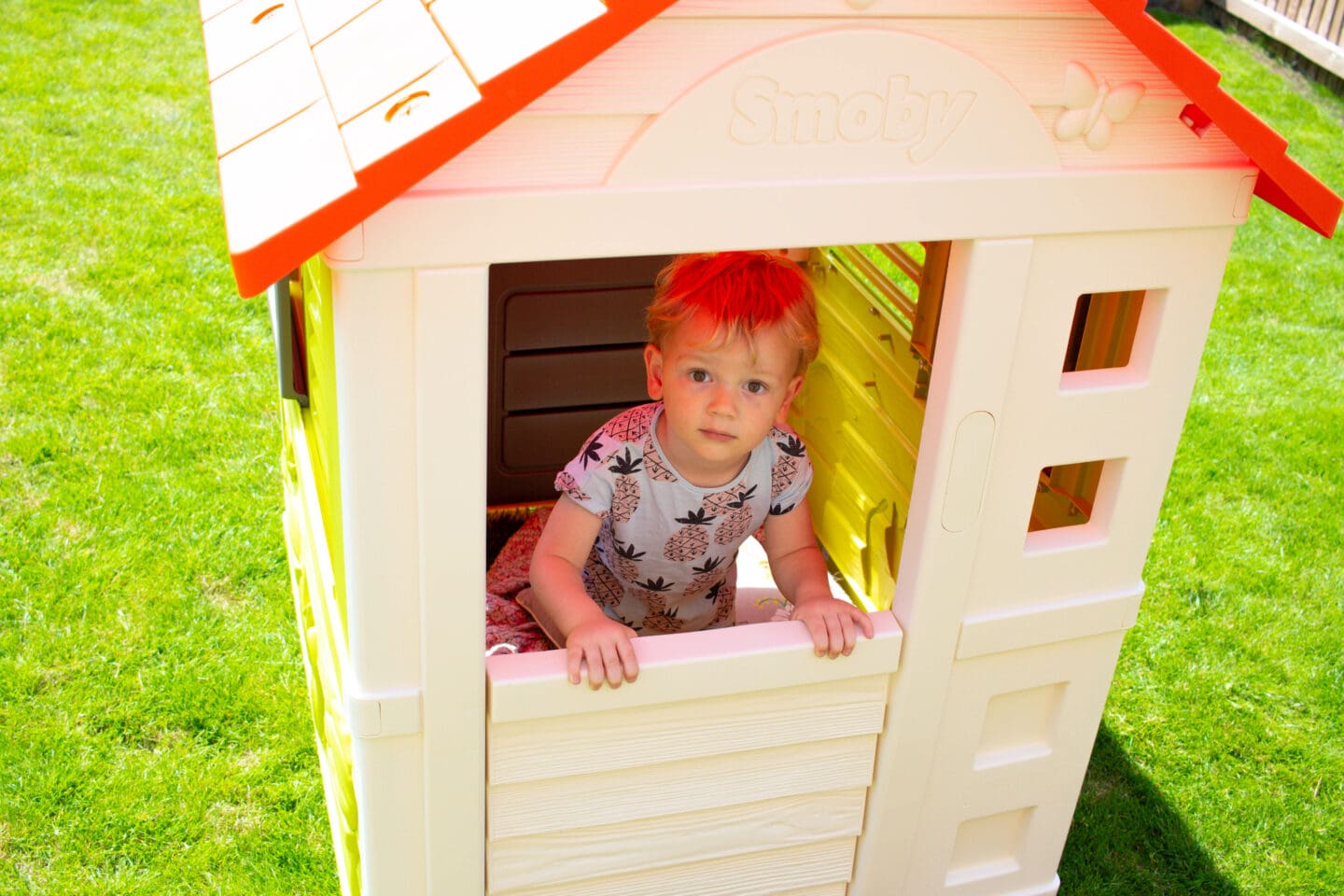 As the house is made from plastic, it’s light enough to move around the garden and easy to clean. It requires no pre-treatment or painting, which is music to my ears as a busy mum. It also means that when the time arises that we move to a new house, we can easily take it with us as it requires no base or permanency. You can find out more and purchase from Amazon SRP £129.99. 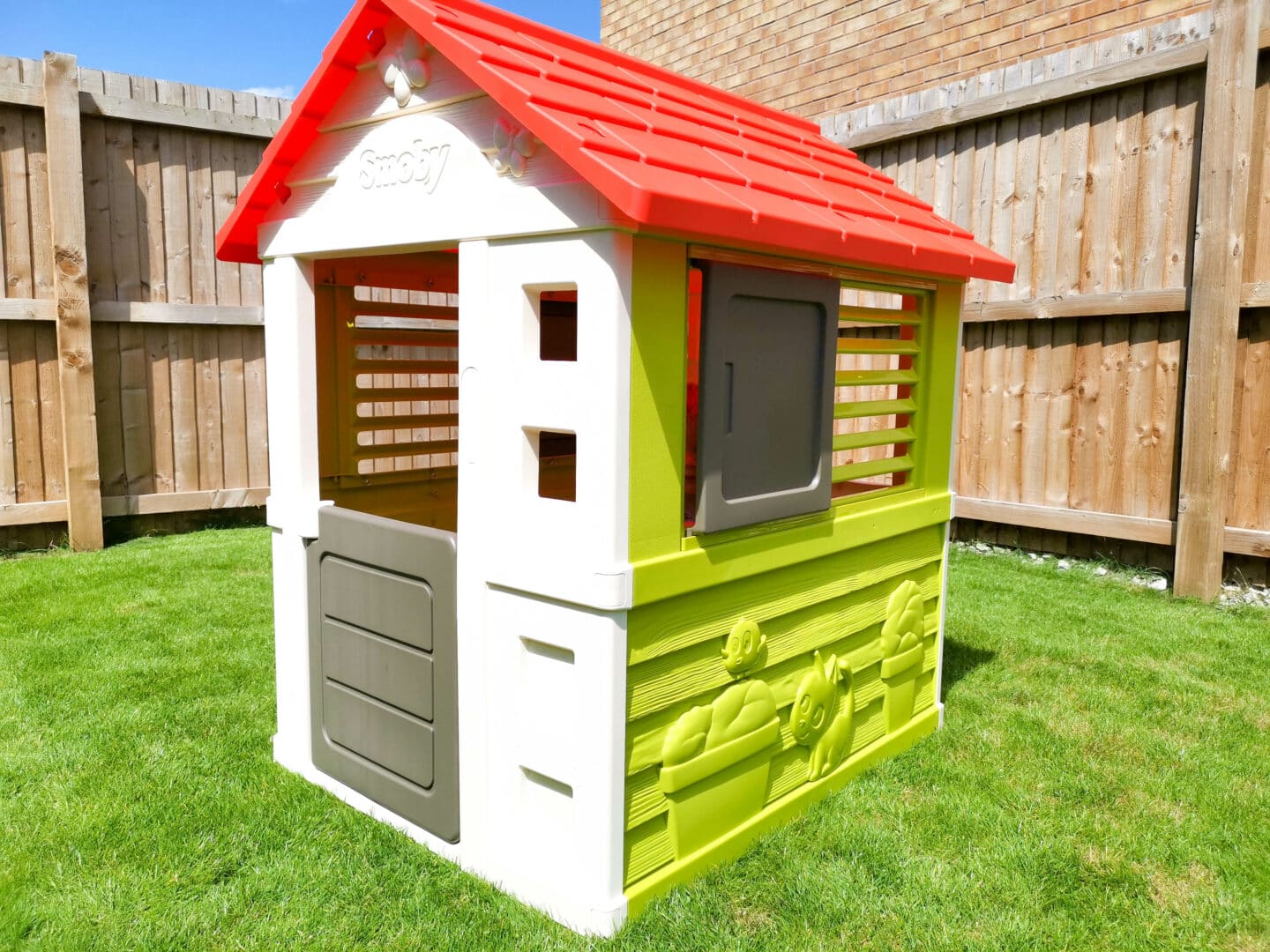 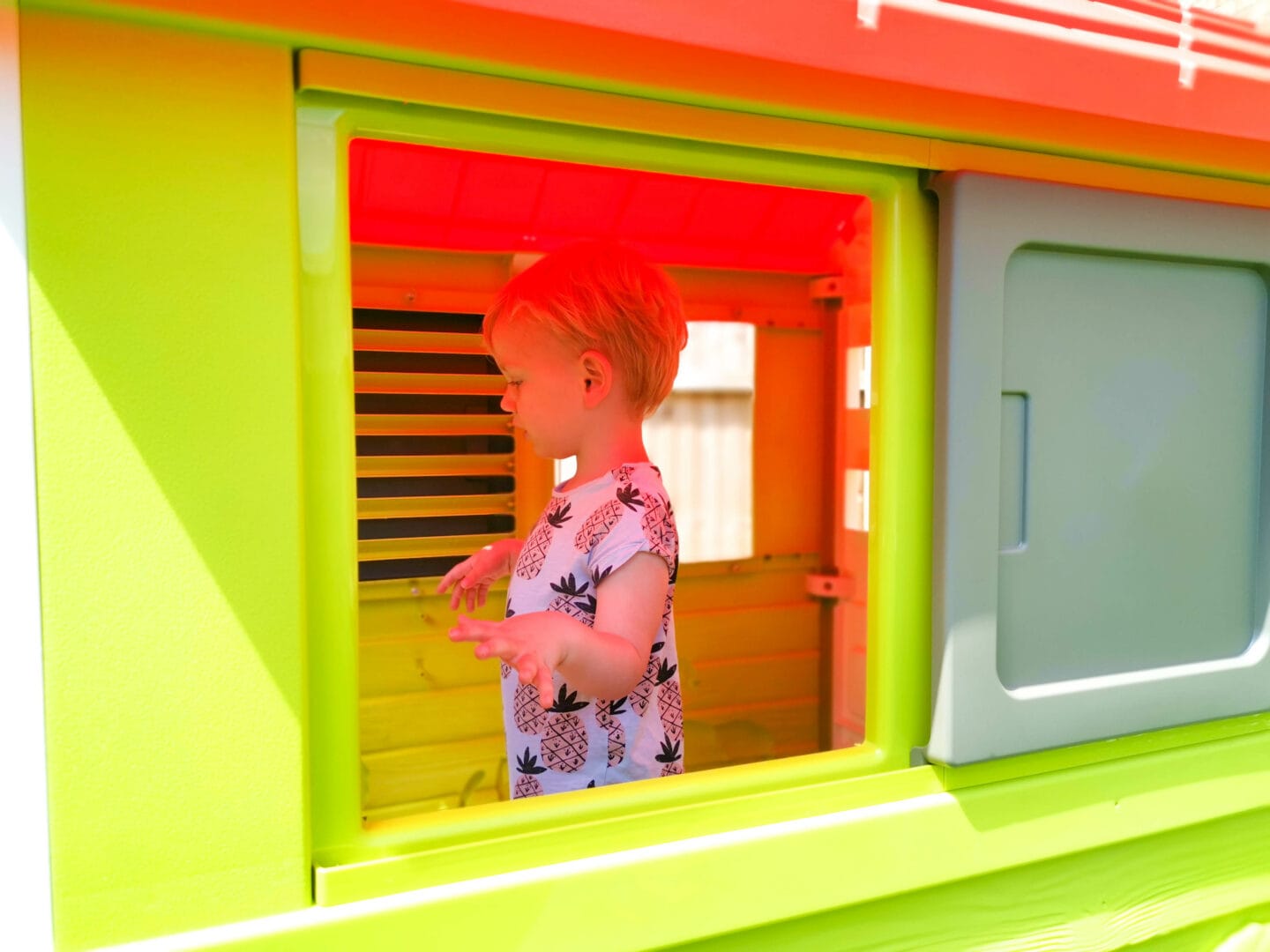 I’m really impressed with both items that we received from a build quality and play point of view. Smoby is a household brand name, and it’s reassuring that their products still match up to that same quality I remember from years ago.