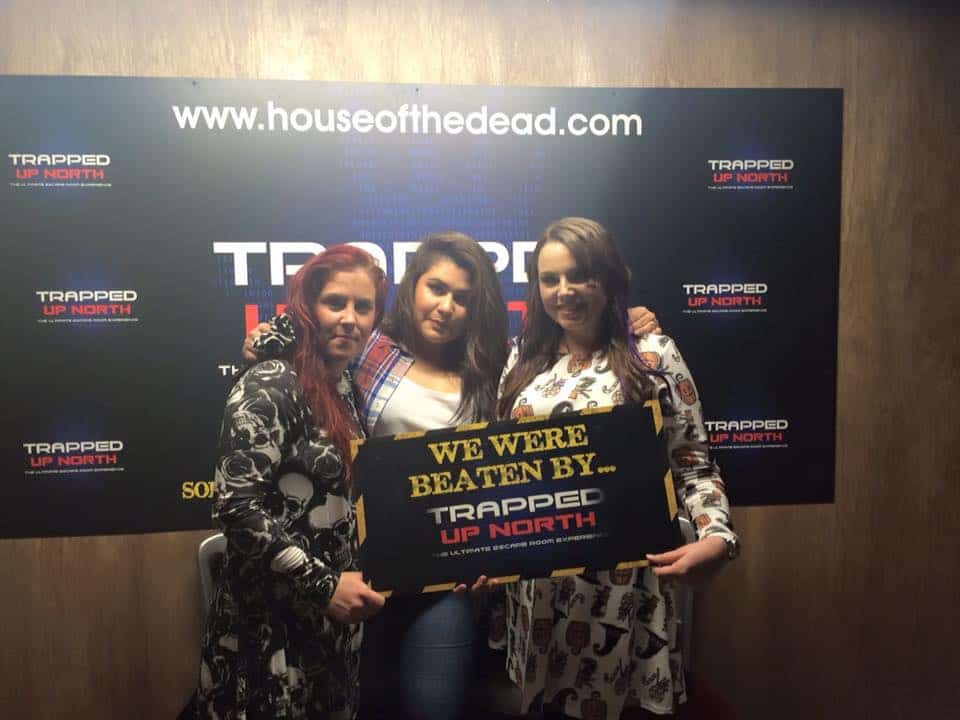 Last night my friends Liliana, Kate and I visited Manchester’s scare attraction Trapped up North. We booked tickets a few weeks ago and since then my anxiety levels have slowly risen. I love Horror. I like being scared, the adrenaline when a movie makes you jump is a drug for me but that’s when I’m in my locked house and have my duvet to hide underneath. It doesn’t matter how much I tell myself its not real when you are in the moment during these staged horror events my heart races and fear well and truly takes over.

First of all a bit about Trapped up north. The idea is simple yet great you have 60 minutes to solve clues, find keys and figure out how to get out of your room before its TOO LATE! Whomever designed the concept is a genius. The rooms are low lighting so its hard to even see well enough not to mention you are terrified of the unknown and what may jump out around the corner. The pressure of the ticking clock and the distraction of cleverly placed items mean you waste time trying to solve clues that have no part in your actual escape. There are three rooms to chose from Quarantine which is a zombie theme, Jigsaw which is a Saw style theme and Cabin Fever which is a serial killer theme.

We chose Jigsaw and I have to admit I googled hints and tips beforehand because I had no idea what to expect. I couldn’t find any spoilers though and you wont find any here either! I can tell you though that first your group is led into a room and the back story to what you are about to face is revealed and the scene is ultimately set. The waiting room is pretty terrifying and I felt utterly sick to my stomach at what we were about to face. When we were finally led to the room we were handcuffed! and that meant the first section of the challenge was made all the more difficult. The challenge itself was set across three main rooms with a number of doors to unlock as well as other items along the way! Not all the keys you find are useful though!

The low light, horror theme and pressure of a time limit all add to the distraction and out of every horror themed attraction I have ever attended this by far was the best and I can honestly say they have nailed it. The standard movie set/horror maze has been in my opinion done to the death and once you have done one they all pretty much work on the same concept. Trapped up North isn’t your usual scare attraction it plays on your fear in a completely different way and is well worth your time and money. If you have the opportunity to attend this attraction I strongly recommend you do you wont regret it. We enjoyed ourselves so much we are wanting to go back and try another room! How many horror mazes make you say that when you leave? Oh and by the way we made it to the final door and only needed one last code to escape! We were so close yet so far! Which room will you chose and will you escape?

Trapped up North is located in The Great Northern Warehouse in Manchester there is parking nearby plus train stations and metro links. The attraction is running right through to December but don’t delay getting tickets as they are selling out fast! Visit them on Facebook https://www.facebook.com/houseofthedeadltd/?ref=ts&fref=ts and their website www.houseofthedead.com for more information and to book tickets. They also have a horror house style attraction House of the Dead it gets great reviews but I haven’t personally tried it however if it is anything like Trapped up North it will be worth every second!

DON’T FORGET HEAD OVER TO: https://www.youtube.com/watch?v=SXKN8dmMGes and watch my video about Halloween Dog Treats!

The opinions and views displayed in this post are solely those of my own. House of the Dead have not paid nor asked me to produce a review and the information written is solely based on my experience.