Mummy Guilt is a Thing

Mummy Guilt is something I’m sure all Mums feel at some stage whether it’s because you are indulging in a few moments of alone time, you’ve told your little one-off or you are just questioning:

‘Am I doing this right? Or am I screwing this child up forever??’

Have you ever eaten the last biscuit, gone out for a date night with your hubby or simply just had to go back to work and felt that overwhelming guilt flood around you? That’s the Mummy guilt right there!

Not the Best Morning

Today hasn’t been the best start to be honest and I’m now suffering a serious case of Mummy guilt. In our kitchen we have a large cabinet unit which I store our wine glasses, dessert bowls and any fancy cups that I want to use for special celebrations. I bought the unit from IKEA a few months back and I love it. The top is glass fronted to show off those fancy items and the bottom is closed so I can store anything unsightly. This morning when I came downstairs I could see one of the shelves was tipping. My instant thought was to rescue the teapot that Henry painted when he was younger, as it was completely irreplaceable. After safely rescuing the item I turned around and literally, in front of my eyes, all three of the top shelves collapsed and all that was left was a pile of glass and porcelain.

The shelves weren’t overloaded and the offending shelf that went first was actually only holding 3 smaller items. Not one wine glass made it. Not that I’m a big wine drinker but I could do with a large glass right about now! All of this before 8am!!!

After I managed to clean up the mess it was time to give Henry a nudge into action. He was awake but he was moving so slowly I was worried he’d been replaced by a sloth in the middle of the night. I began rounding him up and before he’d even sat down at the table his breakfast was ready to go. Due to the death of my best glassware we were now running late so I whizzed upstairs to get dressed and when I returned Henry was just sat, staring blankly, his breakfast completely untouched.

‘Can you eat your breakfast please? We are late!’ I pleaded.

Eventually he finishes and I successfully herd him upstairs to get dressed so we can get going.

Eventually we are heading to the car ready to go and we might just make it to school on time. Except, Henry suddenly has lost use of his arms and is making a weak attempt at best to open the car door. The same door he opens every other morning just fine but not today, not when we are running late.

It’s that moment that I lost it. The morning hadn’t been the best and you could say my sanity was hanging on by a thin thread and this was just the icing on the cake. I literally couldn’t take anymore and I snapped. Before I could stop myself I was shouting.

Any other day would have been different. I would have brushed it off but today I felt like my plate was entirely full and despite not being proud, I did lose it. 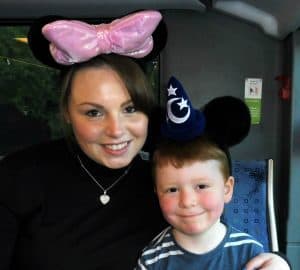 Then the Mummy Guilt Kicks in…

We drove the first few minutes in silence. I felt it almost immediately, the Mummy guilt. It flooded over me like a wave of sickness and I wished I could turn back the last ten minutes. Who cares if we are late for school by a few minutes? We are never late normally, sometimes things happen. I could kick myself for not handling the situation better and for allowing the series of unfortunate events to get to me so I took it out on Henry. I apologised profusely to which Henry reassured me that it was absolutely fine and everyone has bad days. He skipped off to class without a second thought given to it but the Mummy guilt is still with me. When the bell rang to signal the start of the school day I didn’t want to leave him. I wanted to hug him and kiss him and tell him how terribly sorry I am and how I’ll be a better parent.

So I’ve come home and I’ve sat and I’ve thought. I’ve beaten myself up about a situation that is done and passed and cannot be changed. In my mind I’ve made it far worse than it was. I know it was only a shout. A raised voice. Just an escape of frustration but I know it could have been a different outcome. I know shouting didn’t help and I really wished I hadn’t. My child’s no snowflake and I’m certainly not afraid to use a raised voice when needed but I just feel this time it wasn’t needed.

Who knows how long this case of Mummy guilt will last. Do you ever have days like this?

If you want to know more about me head over to this page. For more posts like this you can stay up to date by following me on Bloglovin. Don’t forget to check out my YouTube channel where I post beauty, life, shopping and make-up related videos. You can find all of my social media links in the side bar! Thanks so much for reading!

*This post is based on my own opinions and not sponsored. 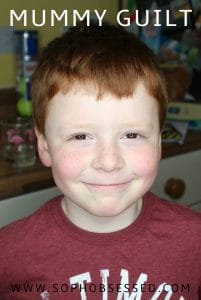